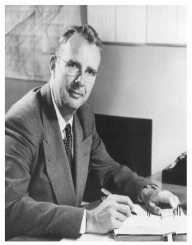 Felix Bloch was a Swiss physicist born October 23, 1905, in American. His contribution to the learning and teaching of physics was enormous. Working together with Edward Mills Purcell, the two were able to deduce a new method for the measurement of magnetic fields of atomic nuclei. This breakthrough gained the two a Nobel Prize in 1952for "their development of new ways and methods for nuclear magnetic precision measurements."That aside, he was involved in the deducing several other physics theorem and laws and has been named after some of them.

Felix Bloch was not just a physicist but also had an interest in music and played the piano, Felix Bloch loved literature, skiing, and mountain climbing. He was appointed the first Director-General of CERN in 1994 and served for a year.

Felix Bloch was born to parents Gustav Bolch, a wholesale grain dealer and Agnes Bloch both Jewish in Zurich, Switzerland. Felix Bloch had his primary education at a public school and nearly gave up then because of lack of motivation. Growing up he had an interest in music so took some music lessons where Felix Bloch learned how to play the piano and was also interested in literature as he grew.

He later moved Cantonal Gymnasium in Zurich for his secondary education and completed in 1924. Later, he continued to theEidengossischeTechnischeHochschule, Zurich. Bolch who was studying engineering at that time changed his focus to physics. To get himself well equipped and knowledgeable in the field of physics, Felix Bloch enrolled at seminars and tutorials by Peter Debye and Hermann Weyl at the EidengossischeTechnischeHochschule, Zurich. Felix Bloch also attended classes of Erwin Schrodinger at the University of Zurich he completed in 1927.

Afterward, Felix Bloch enrolled at the University of Leipzig where Felix Bloch also studied physics and graduated with a doctorate in 1928. It was at the time that he came out with the quantum theory of solids his thesis. In that thesis, he used what he called Felix Bloch waves to describe the electrons. With his knowledge and dedication to research, he would, later on, come out with other breakthrough formulas which were used both in physics and chemistry.

Felix Bloch never gave a little chance to go without trying to capture something in his field of study. With this mindset, he always loved to collaborate and understudy others. At Zurich, Felix Bloch partnered with Wolfgang Pauli and later with NielsBorhwho was a lecturer in privatdozent and other European countries like Germany. Felix Bloch for fear of his life during Hitler reign left Germany in 1933 because of his Jewish background. Felix Bloch made to the United States Of America and worked with the Standford University in 1934

Felix Bloch later became the first professor of theoretical physics at Standford. All this while he was researching other areas of physics to better the field of study. In 1938, Felix Bloch collaborated with the University of California at Berkeley to find out the magnetic movement of the neutron. During this time, Felix Bloch fell in love with life in the US and was given a US citizenship in 1939. At the time of the WW II, Felix Bloch was involved in working on nuclear power at the Los Alamos National Laboratory and left later to work on the radar project at the Harvard University. The war was over, and Felix Bloch went on with his usual investigations but this time into nuclear induction and nuclear magnetic resonance which was a fundamental principle in Magnetic Resonance Imaging (MRI).  With his research, Felix Bloch came out with the Felix Bloch equation to determine the time evolution of nuclear magnetization in 1946.

In the 1950s, Felix Bloch was appointed CERN laboratory and rose through the ranks to become the first Director-General of CERN. After spending some years with CERN, he moved to Stanford University and him 1961 Felix Bloch was made a Max Stein Professor of Physics at the University. Felix Bloch was elected as a foreign member of Royal Netherlands Academy of Arts and Sciences in 1964.

Felix Bloch got married to Lore Misch in 1940. He died on September 10, 1983, of a heart attack in Zurich. He was 77. Felix Bloch was known for his integrity and a problem-solving mentality. This made him sometimes a reserved person, but at normal days he was very friendly.

Felix Bloch alongside Edward Mills Purcelldiscovery of the method of measuring the magnetic field of atomic nuclei using nuclear magnetic resonance was his most prestigious work. Also, his Felix Bloch wave principle derived from his thesis The Quantum Mechanics of Electrons in Crystal Lattice become very useful Felix Bloch waves were used to describe the electrons from condensed matter. It also used in the calculation of specific heat and electrical resistance of metals.

In 1952, Felix Bloch and his partner Edward Mills Purcell jointly won the Nobel Prize Award in physics. This award came as a result of deducing a method for nuclear magnetic precision measurement and other discoveries. He was a member of institutions like the National Academy of Sciences, American Philosophical Society, Pour le Merite and the American Academy of Arts and Sciences.