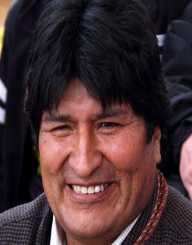 Also Known For : President of Bolivia

Juan Evo Morales Ayma popularly known as Evo Morales is presently serving his third term as The President of Bolivia. He is the first Bolivian President who hails from the indigenous community of Bolivia. The main achievement of his administration is his leftist pro-poor policies of poverty alleviation, reducing the clout and influence of the United States and the Multinational Corporations. His popularity can be ascertained from the fact that, he won his third term as the Bolivian President and is in the office since 2006.

Evo Morales was born on October 26, 1959, in a remote mountainous mining village called Issallawi in Orinoca Canton. His father Dionisio Morales Choque and mother Maria Ayma had seven children during their conjugal life. But only three of them survived, and Evo was one amongst them.  His other two surviving siblings were Esther and Hugo.

Evo’s parents were from the ethnic community of indigenous Aymara people of Bolivia. They were a farming community. Morales started helping his father from an early age by planting and harvesting their farm produce and by guarding their domesticated herd of llamas and sheep. Though he was very much interested in playing sports, mainly soccer, he had little time left after working in his father’s farming field and herding llamas and sheep.

Evo Morales attended the Orinoca’s nursery school when he was barely a toddler. He began his primary education in a single room elementary school of Issallawi. At the age of six, Morales went to Northern Argentina with his sister and father. His father Dionisio worked there in the sugarcane field, harvesting the produce. Morales sold ice cream and briefly attended a Spanish language school there in Northern Argentina. He was able to learn basic Spanish quickly by attending this school for six months.

Being a big soccer fan himself, Morales organized a community soccer team where he became the team captain. In the next two years, he was elected as the training coach for the whole region. The experience helped him get early exposure and experience in leadership skills.

Evo Morales attended the Agrarian Humanistic Technical Institute of Orinoco, Bolivia, but did not complete the final year. He was then sent to Oruro to study for a degree. By 1977, he completed all his courses and examinations, but his academic results were poor. Simultaneously he started earning money as day-labourer, brickmaker, baker and even as a trumpet player for the Royal Imperial Band. He travelled across Bolivia with the band and gained valuable experience in identifying the social and cultural fabric of Bolivia, the challenges Bolivian people face in their day-to-day lives and the works that are needed to be done.

From 1977 to 1978, Evo Morales served his compulsory military service in the Bolivian Army. These two years were the most unstable periods of Bolivian political history. There were five Presidents and two military coups that highlighted the extent of internal turmoil Bolivian people were subjected to during these two years.

In 1979, he went to Cochabamba, a tropics in the eastern lowland of Bolivia. His family was engaged in farming there. Among other local crops of rice, oranges, grapefruit, papaya, and bananas, they also used to grow and cultivate ‘Coca.’ Soon he joined the trade union of coca growers there and was also appointed as the Secretary of Sports.

In 1982, Evo Morales rose to the position of the General Secretary of his region’s union syndicate. In the following year, the United States Government offered $2500 for the destruction of each acre of coca to Morales and other coca growers of the region. Morales declined the offer and started uniting all the coca cultivators of Bolivia to refuse and resist the move. He founded a leftist National Political Party, ‘Movement toward Socialism’ (Spanish: Movimiento al Socialismo; MAS) to facilitate the resistance and also continued to head the federation representing the Coca growers. In 1989, he was arrested following his commemorative speech on the anniversary of the ‘Villa Tunari Massacre.’ The Government agents assaulted him and abandoned him in a remote mountain pass to die. Fortunately, other union members were successful in rescuing Morales.

In 1994, Evo Morales was brutally beaten in custody after being arrested. Thousands marched towards the jail the following day, and Morales was set free soon afterwards. He was arrested again in 1995 along with many others on charges of plotting a coup. They were severely tortured in custody. But the Government agencies were unable to put any formal charge against them, and they were ultimately released. After the release, Morales along with other union members formed a political party, the ‘Assembly for the Sovereignty of Peoples’ (ASP). In 1996, Bolivia’s National Election Court ruled ASP ineligible to stand for elections. ASP then had to devise a strategy where they will be in a vote-sharing agreement with some other like-minded leftist parties.

Evo Morales won a seat in the House of Deputies (the lower house of the Bolivian legislature) in 1997, and in 2002 he was nominated as the MAS candidate for President. He lost narrowly to the eventual winner Gonzalo Sánchez de Lozada. In 2005, Morales was again designated as the MAS Presidential Candidate. This time he won easily securing 54% of the votes polled becoming the first indigenous origin President of Bolivia and also the first Bolivian President since 1982 to win a majority of the national vote. In 2008, he proposed a nationwide vote of confidence on his behalf. He won it hands down and ensured that public support continued to be in his favour.

UNESCO’s landmark declaration of Bolivia achieving the status of full literacy came in 2009. Morales also won his second term as President in the same year. In 2014, Morales was re-elected as the President of Bolivia for a third term.

Evo Morales has never been officially married and kept his single status throughout his life. However, he had several extramarital relationships and had two children out of these relationships. He has a son called Alvaro Morales Paredes and a daughter named Eva Liz Morales Alvarado.