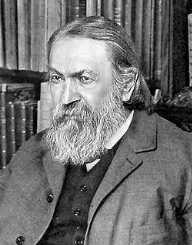 Physicist, philosopher and mathematician Ernst Mach was born on the 18 February 1838 in Moravia to Johann Mach and Josephine Landhaus. The couple had three children. When he was two years old, his family moved to Untersiebenbrunn, Austria where he was raised on a farm.

Ernst Mach was homeschooled until the age of fourteen, mainly by his father.  He then did three years at a gymnasium in Moravia.  After graduating from the gym, he enrolled at the University of Vienna where he studied physics and mathematics, receiving his doctorate in 1860.

After obtaining his doctorate, Ernst Mach worked with Andreas von Ettingshausen where he did experiments on acoustics and optics. Around this time he also studied the Doppler Effect. (1860-1862). He also lectured at the University of Vienna until 1864. Mach then spent three years as Professor of Mathematics and Physics at Graz University in Graz, Austria.

In 1967 Mach joined Charles University in Prague as Professor of Physics, and he stayed on there for three years.  He was appointed the professor of the Theory of Inductive Science Department at the University of Vienna in 1895 and spent the next three years there retiring after having a stroke in 1889.

Ernst Mach made many significant contributions to physics, philosophy and physiological psychology. He was the first scientist to study supersonic motion. Mach also made advancements in the understanding of the Doppler Effect. Einstein credited Mach with helping him understand Newtonian concepts of space and time, and he saw Mach as the philosophical forerunner of his theory of relativity.

The scientific term Mach Bands comes from his work on the spatial distribution of light stimulus on the retina which he first published in 1865. He believed that perception works through perceiving the relations between stimuli.

Mach is also known for his development of photographic and optical work measuring wave propagation and sound waves. Edmund Husserl and von Ehrenfels both acknowledged him as an influence on their work involved in the gestalt theory. Mach’s work on the inner ear led to the understanding human balance and movement. He also developed what is now known as Mach’s Principle regarding physical reasons for inertia.

Mach wrote a lot about space, and in Science of Mechanics, he presented an analysis of absolute space working from the understanding that physiological space is different from geometrical space, i.e., physiological space is constructed by our cognitive structure while the square area is intellectual based on experience.

The Mach number, i.e., the ratio of the velocity of an object to the speed of sound;  is named after he established the principle in 1887.

The Principles of Physical Optics (1926)

Ernst Mach married Ludovica Marussig in 1867, and the couple had a daughter and four sons. Mach’s son Ludwig was also a scientist and worked closely with his father. In 1892 they developed the Mach-Zehnder interferometer together. In 1901, Mach became a member of the Austrian Parliament. He was a reformer who influenced the left of politics.

Ernst Mach suffered a stroke in 1898 and retired in 1901. He died near Munich in 1916. The Austrian government encourages foreign researchers to work at tertiary institutions by having a series of grants which are named after Ernst Mach.