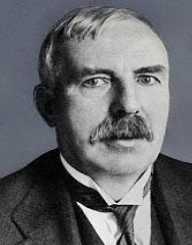 Ernest Rutherford was born on August 30, 1871. He was a physicist who came to be known as the father of nuclear physics. In 1908, he received the Nobel Prize in Chemistry for his investigations into the disintegration of the elements and the chemistry of radioactive substances.  He identified and named the Alpha and Beta radiations and also named the Gamma Rays. In 1917, he conducted experiments that led to the splitting of atoms and during the process he discovered and named the proton. He has achieved a lot in the field of nuclear physics, and he is acknowledged by scientists for that and the world over. He died on October 19, 1937.

Ernest Rutherford was born on August 30, 1871, in Spring Grove, New Zealand. He was born to James Rutherford who was a Scottish emigrant farmer and Martha Thompson who was an English emigrant school teacher. He was brought up alongside eleven siblings. He attended Havelock School, and at sixteen he entered Nelson Collegiate School. In 1889, he joined Canterbury College, University of New Zealand, Wellington through a university scholarship.

In school, Ernest Rutherford took an interest in rugby, and he was also a bright and smart student. He received a double First M.A degree in Mathematics and Physical Science in 1893. In 1894, he received his Bachelor of Science Degree from the college. In 1894, he received an ‘1851 Research Fellowship’ from the Royal Commission for the Exhibition of 1851.  The fellowship helped him pursue post graduate studies as a research scholar under J. Thompson at the Cavendish Laboratory, University of Cambridge.

Under the supervisions of Thompson, Ernest Rutherford invented a detector for electromagnetic waves. In 1897, he received his B.A Research Degree and the Coutts-Trotter Studentship of Trinity College. In 1898, he discovered the presence of Alpha and Beta rays in Uranium radiation and wrote down some of the characteristics. In the same year, he was accepted for the position of Macdonald Professor of Physics at McGill University in Montreal, Canada. In 1900, he received his Doctorate from the University of New Zealand.

In 1907, Ernest Rutherford went back to England to become the Langworthy Professor of Physics at the University of Manchester. During World War II he was among the people who worked on the project of submarine detection by sonar. In 1909, he conducted the Geiger-Marsden experiment alongside Hans Geiger and Ernest Marsden. The research established the nuclear nature of atoms by the deflection of alpha particles passing through a thin gold foil. In 1919, he became the Cavendish Professor of Physics at Cambridge. He, later on, became the Chairman of the Advisory Council, H.M Government, Professor of Natural Philosophy, Royal Institution, London and Director of the Royal Society Mond Laboratory, Cambridge.

In 1919, the first person to transform one element into another, Ernest Rutherford used radiation to convert nitrogen into oxygen. In 1920, he named the particle neutron during the Bakerian Lecture. In 1921, he theorized the existence of neutron in association with the Niels Bohr. In 1925, he urged the Government of New Zealand to support research and education. In 1926, his initiative led to the establishment of the Department of Scientific and Industrial Research. Between 1925 and 1930, he was the president of the Royal Society. He later became the president of the Academic Assistance Council.

In 1908, Ernest Rutherford was awarded the Nobel Prize in Chemistry for his investigations into the disintegration of the elements and the chemistry of radioactive substances. In the years 1914, 1925 and 1931 he was knighted, admitted to the Order of Merit and raised to First Baron Rutherford of Nelson, New Zealand, and Cambridge respectively. In 1903, he was elected a Fellow of the Royal Society. He received many honors in his lifetime including the Faraday Medal of the Institution of Electrical Engineers among others. He also received honorary doctorates from many universities including Cambridge University among many others.

In 1900, Ernest Rutherford married Mary Georgina Newton with whom he had a daughter, Eileen Mary. He died on October 19, 1937, of a strangulated hernia.