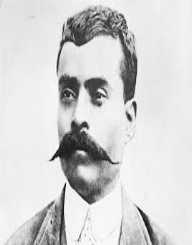 Emiliano Zapata may have never been known to the world had it not been for the Mexican Revolution.

Emiliano Zapata is best known as the commander of the Liberation Army of the South that was responsible for ousting the Mexican president.

Emiliano Zapata was born in Anenecuilco, Morelos, in Mexico on August 8, 1879.  He did not have much of an education living as a poor peasant in his village.  By the time Zapata was 17, he was supporting his family due to the death of his father.

Despite the lack of education he received in his youth, Zapata was active in the politics that affected his neighbors.  In 1897 he was arrested during a protest against the hacienda that took over the land of many of the villagers.

Emiliano Zapata continued to protest. Thus he was drafted into the Mexican Army.  After serving six months, he found work in Mexico City.  He returned to Anenecuilco in 1909.  It was then that he took his first elected office position as the council board president.

As council board president, Emiliano Zapata worked to negotiate the compromise between the villagers and the hacienda owners.  Some were peaceful, but others turned into conflict and land was returned to villagers by force.

Emiliano Zapata was a leader that fought for the rights of the villagers who held the deeds to the land.  He struggled when the government showed their support for the wealthy.

The Mexican Revolution started at the time that elected his opponent Francisco Madero challenged Mexican president Porfirio Diaz.  Zapata offered to assist Madero in overturning President Diaz if he would help regarding land reform.

That is when Emiliano Zapata took on the role as leader of the Liberation Army of the South in 1910.  In six days in May 1911, his army took control of Cuautla.  As revolutionaries showed their power, Diaz left.  Even though Madero became president of Mexico, he did not honor his agreement with Zapata.

Emiliano Zapata continued to fight for land reforms.  He prepared the Plan of Ayala which sparked the Revolution again.  It stated that Madero was not capable of deciding for the people.

Haciendas needed to return the land to the rightful owners or have the land forcefully taken from them.  “Land and Liberty” became the slogan of the revolution.  When General Huerta assassinated Madero, Zapata would not unite troops.

Emiliano Zapata continued to fight for land reform even after the civil war ended.  Supporters of Mexican president Venustiano Carranza will kill Emiliano Zapata on April 10, 1919.  He was 39 years old .

Emiliano Zapata is most recognized for defending the rights of the peasants against corrupt government and wealthy hacienda landowners.  He fought for land reforms as his primary mission.

His army used guerrilla tactics and also allowed women to fight for “land and liberty.”  No government army could ever defeat them in battle.  The story of Emiliano Zapata was later made into a film starring Marlon Brando.

Viva Zapata! Premiered on the big screen in 1952.  Zapata is still a hero in the eyes of farmers and indigenous people.  His name is on many buildings, streets, and towns.