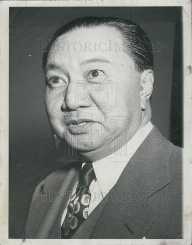 Elpidio Quirino was born on November 16th, in 1890. He is remembered for having served as the sixth president of Philippines. Before rising to the most coveted seat in the country, he had served as the nations’ vice president. Other political posts that he served in include serving as the interior secretary, foreign affairs secretary, and the finance secretary.

Elpidio Quirino was born on November 16th, in 1890. His birthplace was in Vigan in the Philippines. He was the son of Don Mariano Quebral Quirino and Doña Gregoria Mendoza Rivera. Quirino was baptized three days after he was born.

He went to Vigan High School where he earned his secondary education. After this, he moved to Manila where he landed himself on a job as a computer technician. He was working with the Bureau of Lands. Similarly, around this period, he also offered his services to the Manila Police as a clerk.

While residing in Manila, Elpidio Quirino joined the University of the Philippines. In 1915, he graduated with a bachelor’s degree in law. Shortly after, he became a member of Pan Xenia Fraternity.

After graduating from the university, Elpidio Quirino went and worked under the then-Senate President called Manuel Quezon. It is from this point that Quirino’s political career took its course. In 1919, he was chosen to serve under the Philippine House of Representatives. It did not take long before his election into the Philippine Senate in 1925. He was re-elected into the Senate in 1931.

In mid-1942, the Philippines were held captive by Japanese troops. During this period, Elpidio Quirino went underground for he did not want to be linked with the puppet government that the Japanese people had initiated. However, he was captured and imprisoned. The Japanese troops killed his family during the Battle of Manila which occurred in 1945.

When the war came to an end, Elpidio Quirino took charge of the Liberal Party as its majority leader. In the country’s first elections in 1946, Manuel Roxas was chosen for the presidency. Quirino became his vice president. In April 1948, Quirino took over as the president after Roxas died mysteriously.

In spite of the promises that he had made to the people, Elpidio Quirino's first term as the president was coupled with numerous controversies such as nepotism and misuse of funds. In November 1949, he was re-elected back to the office. In 1953, he tried to run for office again but was defeated by Ramon Magsaysay, his former defense secretary.

In 1921, Elpidio Quirino married Alicia Syquia. The two were blessed with five children in their marriage. Following his poor health, Quirino retired from politics in 1953.

Elpidio Quirino passed away on February 29th, in 1956 after suffering a heart attack. He died at the age of 65.