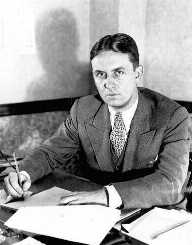 He joined the Bureau of Investigation and became an employee of the U.S. Treasury Department (1927). Working for the Treasury as a member of the Bureau of Prohibition in Chicago, Ness got involved in the investigation into Chicago gangster Al Capone. This work involved investigating Capone ’s illegal breweries. The team he headed became famous as The Untouchables because of their refusal to take bribes. Ness and his team's investigation eventually led to Capone’s imprisonment in 1932.

In 1933,  Eliot Ness was tasked appointed an alcohol tax agent, and in 1934 he was relocated to Cleveland, Ohio. During his time in Cleveland, he was Safety Director for the Fire and Police Departments of the city. He then worked for the government in Washington D.C. between 1942-1944. Moving back to Ohio when  Eliot Ness was appointed the chairman of the Diebold Corporation (1944-1951). In 1953 he joined Guaranty Paper Corporation which specialized in the prevention of counterfeit notes and documents, moving to Coudersport, Pennsylvania when the company relocated the business there.

Eliot Ness developed a problem with alcohol and also struggled with debt in his final years. He was known for regaling people in bars about his days with The Untouchables.

Despite dying in relative obscurity,  Eliot Ness’ life has been immortalized in fiction. He also co-authored a book with Oscar Fraley, The Untouchables (1957) which was published posthumously and went on to become a bestseller. The notes he contributed to the book at held by the Western Reserve Historical Society, Cleveland. The late 1950s television series, The Untouchables was based on the book.

In 1987 Kevin Costner, Sean Connery and Robert De Niro appeared in the film The Untouchables with Costner playing the role of Ness. Recently a detective novel based on one of Ness’ murder investigation in Cleveland, The Noir Evil (2017) was published. A beer company in Cleveland has a lager, Elliot Ness.