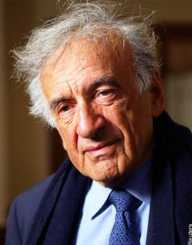 Elie Wiesel was a journalist, author, and professor of the 20th century.  His most notable work, however, was for his autobiographical work Night detailing his survival in Nazi concentration camps.

Elie Wiesel was born on September 30, 1928, in Sighet, Transylvania, Romania.  His parents were Shlomo and Sarah.  Shlomo was a grocery store owner in their village.  He had three sisters, Hilda, Tzipora, and Beatrice.

Elie Wiesel was 15 when the Nazis came to their village, separated the Jews from the rest of the citizens, and placed them in ghettos.  As prisoners, Elie Wiesel and his family were sent to Poland to Auschwitz concentration camp in 1944.

Growing up in Romania, Elie Wiesel's parents encouraged his learning from an early age.  In his early years, Elie Wiesel was fluent in Yiddish, Hebrew, Hungarian, German, and Romanian.

Elie Wiesel focused on his religious studies at a nearby yeshiva or Orthodox Jewish school.  After the war, Wiesel attended the Sorbonne in Paris, France where Elie Wiesel studied literature, philosophy, and psychology from 1948 to 1951.

Elie Wiesel grew up in an orthodox Jewish household.  His father taught him reasoning and humanism.  His mother taught him faith.  Elie Wiesel learned how to read literature, but also studied the Torah and Kabbalah.  They spoke Yiddish at home but were also fluent in Hebrew.

After World War II, Elie Wiesel was a journalist while he was writing his novels.  Elie Wiesel contributed to French and Israeli newspapers.  Elie Wiesel wrote for L'Arche in France.  When he was assigned to Israel in 1949, Elie Wiesel was hired to correspond from Paris for Israel's Yedioth Ahronoth. As much as Elie Wiesel wanted to leave the Holocaust in his past, his friend Francois Mauriac encouraged him to write about those experiences. This led to the 900-page Yiddish memoir And the World Remained Silent.  It was published in its entirety but later condensed it to the French version La Nuit.

Yediot Ahronot sent Elie Wiesel to New York to be the foreign correspondent for the Israeli daily newspaper.  While on assignment, he published the English translation of La Nuit in 1960.  Night gained its popularity slowly. Eventually, it sold over ten million copies in the United States and in 30 worldwide.

Elie Wiesel continued writing books.  In his lifetime, he wrote almost 60 books.  Many of the publications were non-fiction Holocaust literature, but he also wrote some novels as well. His details were often based on his personal experience.  Elie Wiesel became one of the leading literary figures who wrote on the topic of the Holocaust and from this era.

Elie Wiesel was also an educator.  He was a Distinguished Professor at City University of New York from 1972 to 1976.  He was the Andrew Mellon Professor of the Humanities at Boston University in 1976.

Elie Wiesel taught religion and philosophy.  In 1982 Elie Wiesel was the Henry Luce Visiting Scholar in Humanities and Social Thought at Yale University.  At Columbia University, he was the Ingeborg Rennert Visiting Professor of Judaic Studies at Barnard College from 1997 to 1999.

The legacy of Elie Wiesel is one that no one could ever forget what happened to the Jewish people and other victims of the Holocaust during World War II.  His books made its impact in the world of literature.  Elie Wiesel was also involved in Jewish causes.

Elie Wiesel served as the chairman of the Presidential Commission on the Holocaust from 1978 to 1986 (now known as US Holocaust Memorial Council).  Through his efforts, he started the construction of the United States Holocaust Memorial Museum in Washington, DC.  It was founded in 1980 and opened to the public in 1993 to provide documentation, study, and interpretation of Holocaust history.

Elie Wiesel and his wife established the Elie Wiesel Foundation for Humanity in 1986.  The foundations promote the understanding of different ethnic groups while combating injustice and intolerance.  Elie Wiesel used his Nobel Peace Prize award money to establish the organization.