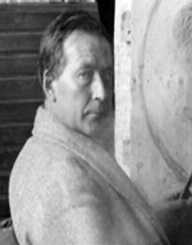 Einar Jónsson was an Icelandic sculptor who is best known for his statue of Thorfinn Karlsefni in Philadelphia.

Einar Jónsson was born in Galtafell, Iceland on 11 May 1874. Jónsson’s parents were GróaEinarsdóttir and JónBjarnason. Jónsson was influenced to become an artist when he visited the Icelandic parliament building as a child and saw the art exhibited there. Jónsson moved to Reykjavik at age 17 to study at the Hermes commercial school. He studied English and drawing. Jónsson became very interested in sculpture, and as Iceland had no tradition of the craft, he moved to Denmark to study it further. Jónsson studied wood carving and sculpture in Copenhagen, working with numerous Scandinavian artists. He enrolled in the Royal Danish Academy of Fine Arts in 1896 and trained there for three years. He became a keen admirer of classical and renaissance sculpture during his studies.


Career As A Sculptor

Einar Jónsson exhibited his first work in 1901 in Copenhagen; it was titled, Outlaws.The following year the Icelandic government, Althing, sponsored Jónsson to study in Rome. During his time in Rome Jónsson came to reject classical sculpture as too constrained and stifled utterly. Jónsson instead became more influenced by German symbolism. This influence is shown in his 1903 work, Man, and Woman, which was exhibited in Vienna. Jónsson also received some commissions for statues of famous Icelandic figures. Two of his notable works were of the Icelandic poet Jónas Hallgrímsson and Ingólfur Arnarson, the first Scandinavian colonist of Iceland.

In 1909, the Althing offered to house and sponsored Jónsson if in return he donated his works to the Icelandic people. Einar Jónsson agreed and returned to Iceland and began work on the construction of a museum for his art. The museum would later host many of the private works Jónsson created such as the Tree of Life and Thor Wrestling with Old Age. Much of Jónsson’s private work was inspired by the old folktales and sagas of Icelandic history. The majority of Germanic and Scandinavian mythologies were drawn from the Icelandic sagas, as they are the earliest written source. One of Jónsson’s best-known works was commissioned in 1914.

Joseph Samuel, an American, was creating a public park and wanted it decorated with statues that told the story of American History. He hired Jónsson to create a statue of Thorfinn Karlsefni, the first European colonist of America. His statue still stands in East River Drive in Philadelphia. Einar Jónsson also created a statue of Icelandic independence leader JónSigurðsson for the city of Winnipeg, Canada; it was a recreation of one he had already created in Reykjavik. After two years away Jónsson returned to Iceland and largely focussed on private work. Jónsson largely worked with plaster due to the lack of other sculpture materials in Iceland.

Einar Jónsson married his wife Anna Marie Jørgensen in 1917, and she accompanied him on his journey to North America. Jónsson died on 18 October 1954 in Reykjavik.