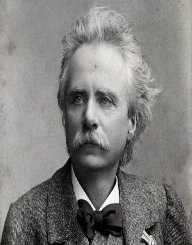 Edvard Hagerup Grieg was a world-famous composer and pianist who spread Norwegian folk music outside Norway. He was known for his poignant music and symphonies. His music was a detailed expression of real life situations and human feelings. His devotion to Norwegian folk music and extensive promotion made him a cult figure in Norway. Edvard Grieg is known all over the world for his legendary work, the ‘Piano Concerto in A minor.’

Edward Grieg was the son of Alexander Grieg and Gesine Judith Hagerup and was born on June 15, 1843, in Bergen, Norway. Gesine was the daughter of distinguished Edvard Hagerup and worked as a music teacher. Alexander was a merchant.

Noticing his interest in music, his mother started teaching Edvard fundamentals of piano music at the tender age of 6. He enhanced his musical skills further by extensive studies in prominent schools such as Tanks School.

At the age of 15, Edvard was fortunate to come in contact with ‘Ole Bull’, the renowned violinist of Norway and also his relative in 1858. He was impressed by Edvard’s talent and forced his parents to admit him to ‘Leipzig’s Conservatory’. The Conservatory inspired him to love music and live music forever.

Edward Grieg opted for piano as primary and organ as an elective in Leipzig’s Conservatory. The course was for a period of four years. Though he was a brilliant student and impressed his teachers, he was unhappy with the regulations and customs of school life. Edvard contracted a life-threatening lung infection in 1860 but was able to recover after proper treatment.

He gave his first concert in Karishamm, Sweden. He studied under the guidance of most learned and distinguished faculty in Leipzig and by the time he left the conservatory, he was a fully trained and thorough musician.

On his return to his hometown, Edward Grieg charmed his audiences with Beethoven’s sonata, ‘Pathetique.’ He shifted to Copenhagen, Denmark and over the next three years came in contact with illustrious composers such as Rikard Nordraak, J.P.E Hartmann and Niels Gade.

Grieg was forced by Niels Gade to produce his own symphony and to perform on many occasions. Rikard Nordraak motivated Edvard to create and compose more music.

His friend Nordraak died in 1866, and Edward Grieg composed funeral march in his memory. This composition made him famous overnight and his talent began to catch the fancy of people. Initially his compositions reflected German romanticism and later he tried to introduce Norwegian folk music in his works.

Edvard created and composed the masterpiece, ‘Piano Concerto ‘A” minor’ between 1867 and 1869 while he was holidaying in Denmark. It was performed by the renowned Edmund Neupert on April 3, 1869. Edvard came in contact with Franz Liszt in 1868 and Liszt was highly impressed by the music of Edvard. Liszt arranged the visit of Edvard to Rome and enabled him to play the violin sonata.

During 1874-1876, Edward Grieg composed many types of music, and he became famous for his composition for Ibsen’s play, ‘Peer Gynt.’ In 1888, Edvard had a meeting with Tchaikovsky in Leipzig and they admired each other’s style of music. As his music became a rage, he associated with the Bergen Philharmonic Orchestra and became the music director of the orchestra during 1880-1882.

In 1906, he came in contact with Percy Grainger in London and Percy popularised his Piano Concerto all over the globe. His popularity rose with his age and he recorded his music for gramophones. LP’s and CD’s of his music can be seen in musical museums even today.

Edvard Grieg and his cousin and talented artist, Nina Hagerup got married in 1867 and had one daughter, Alexandra. Alexandra died of Meningitis in 1869.

Edward Grieg breathed his last on September 4, 1907, at the age of 64 after a long illness. His funeral was attended by over 40,000 fans. The funeral march he had composed for Rikard Nordraak was replayed for his own funeral by his friend Johan Halverson. On that occasion, Chopin played Piano Sonata which was the favourite of Edvard.

Edvard Grieg was responsible for promoting Norwegian music all over the world and his music is played by orchestras even today. The house, ‘Troldhuagen’ in Bergen where Edvard and Nina stayed has been converted into a museum depicting his life and music.