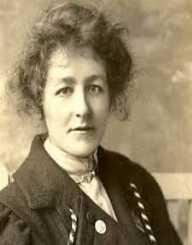 Edith New was born on March 17, 1877. She was an English Suffragette. She was renowned for being among the first suffragettes to use Vandalism as a tactic. She died at the age of Seventy Three years.

Edith New was born Edith Bessie New on March 17, 1877, in Swindon, England.  She was born to Frederick James New and Isabella New. She was brought up alongside two siblings. In 1891, she started working as a teacher. She later moved to London.

Edith New later quit her teaching work and started working at the Women Social and Political Union’s organizer and campaigner. She toured across England creating awareness about the women’s movement. In 1908, she alongside Olivia Smith chained themselves to the 10 Downing street railings and protesting to create a distraction for two of their fellow suffragettes to sneak in before the arrest.

She was later arrested alongside Mary Leigh of breaking windows at 10 Downing Street. They then served two months imprisonment in Holloway. They were the first of all the Suffragettes who used vandalism for the voices of others to be heard.

The leader of the movement then Emmeline Pankhurst approved the vandalism tactic after giving them a visit at the prison. She then underwent a hunger strike in protest for women’s right to vote. When their release date reached, a parade was held on their honor by the Suffragettes Delegation.

Upon their release, Edith New was awarded a medal in recognition of her contributions to the suffrage movement. In her successful vandalism act, her fellow suffragettes started using vandalism and arson to get their voices heard. She later retired.

Edith New died on January 2, 1951, in Liskeard, England. She died at the age of Seventy Three years.