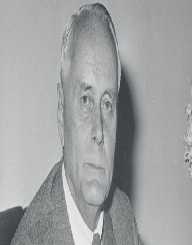 Edgar Adrian, 1st Baron Adrian, was an English electrophysiologist and a Nobel Prize for Physiology winner. Born on November 30, 1889, he won the Prize with Sir Charles Sherrington for the work on functions of neurons. Adrian, with an experiment, proved the evidence for the all-or-none law of nerves.

After the discovery, Edgar Adrian, 1st Baron Adrian stated, "I had arranged electrodes on the optic nerve of a toad in connection with some experiments on the retina. The room was nearly dark, and I was puzzled to hear repeated noises in the loudspeaker attached to the amplifier, noises indicating that a great deal of impulse activity was going on. It was not until I compared the noises with my own movements around the room that I realized I was in the field of vision of the toad's eye and that it was signaling what I was doing."

In 1928, Edgar Adrian, 1st Baron Adrian published the results of his work stating that the excitation of the skin under constant stimulus remains strong at the initial stage but decreases as time goes on, however, the sensory impulses along the nerves have constant strength from a point of contact but reduces in frequency with time, and this eliminates the sensation in the brain.

Edgar Adrian, 1st Baron Adrian used his results to research into pain caused by the stimulus of the nervous system. With this, he also discovered the reception of such signals in the brain and spatial distribution of the sensory areas of the cerebral cortex in different animals. This resulted in the knowledge of the sensory map, name the homunculus, in the somatosensory system. Using the electroencephalogram, Edgar Adrian, 1st Baron Adrian delved into the study of electrical activities of the brain in humans. His research won him the Nobel Prize in Physiology, which he shared with Sir Charles Sherrington. Adrian spent most of his later research career on olfaction.

In 1938, Edgar Adrian, 1st Baron Adrian was elected a Foreign Member of the American Academy of Arts and Sciences and also became a Foreign Member of the Royal Netherlands Academy of Arts and Sciences in 1946. Adrian was awarded membership of the Order of Merit in 1942 and in 1955, was created Baron Adrian, of Cambridge in the County of Cambridge.