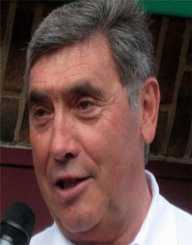 Eddy Merckx was born 17th June 1945, to Jules and Jenny Merckx. He was born in Belgium, the eldest of three children. He had a younger brother, Michel, and a younger sister, Micheline, who were twins. The year after he was born, his parents moved to Brussels, where they took over the management of a grocery store.

Eddy Merckx began riding from a very early age and competed in his first race in 1961. With all the racing he was starting to do, his grades at school were suffering. His headmaster offered to postpone his exams, but he decided to drop out of school instead and concentrate on his riding.

Over the next four years, from 1961 to 1965, Eddy Merckx won 80 races as an amateur rider. He also competed in the 1964 Olympic Games but didn’t place. He decided to turn professional in 1965, and signed with the Solo-Superia team. He switched over to Peugeot-BP-Michelin the following year and won his first major, the Milan-San Remo.

When the 1967 season completed, Eddy Merckx then signed on with Faema, for ten years. The contract was worth 400,000 Belgian francs. He won his first Grand Tour race, the Giro d’Italia. At the close of the 1970 season, Faema went under. He then moved to another team, Molteni. He was with them until the end of the 1976 season, when they withdrew their sponsorship.

Eddy Merckx signed on with Fiat France for the 1977 season. They finished their sponsorship at the end of the season, deciding to concentrate on having a French squad instead. In 1978, the department store called C&A decided they would sponsor Eddy Merckx and his team. He only participated in five races, before announcing his retirement in May. In 1980,  he opened a cycling company in Brussels. Despite early financial problems, Eddy Merckx Cycles continued to produce bicycles, and the models were used by some of the top professional team throughout the 1980s and 90s.

Eddy Merckx stepped down from the CEO position in 2008 and sold most of his shares at the time. From 1986 to 1996, he managed the Belgian national team world championships, and was also the acting race director for the Tour of Flanders, but only for a short period.

In 2001, Eddy Merckx was approached by the Emir of Qatar, who expressed his interest in having a bicycle race to showcase Qatar to the world. He successfully got the race up and running, the first race being held in 2002. He also co-owns the race and continues to help organize it. He also co-owns the Tour of Oman and helps with its organization as well.

During his years of racing, Eddy Merckx received several injuries including a broken vertebra and having a serious crash which caused a concussion, whiplash, and a displaced pelvis. He was also punched in the back by a spectator in one of his races, which caused an inflamed liver. In addition to his racing injuries, he battled various maladies such as sinusitis, and pneumonia, amongst others, which affected his riding at different times.

In later years he also had a pacemaker installed as his doctor had found an issue with his heart. It was done as a preventative measure, and Eddy Merckx has had no heart problems.

On three different occasions throughout his career, Eddy Merckx was caught up in doping scandals. The first was in 1969 when he tested positive for amphetamines. The race director, Vincenzo Torriani, disqualified him for a month, but only a few days later the suspension was nullified by the UCI. He declared his innocence, and conspiracy theories abounded.

In 1973, he tested positive for norephedrine. A counter-analysis was done, which also resulted in a positive outcome. The drug was supposedly present in a cough medicine prescribed by the team doctor. Eddy Merckx was disqualified from his win in the Giro di Lombardia. As well as being excluded from the race, Merckx was fined and suspended.

The third occasion was in 1977. Several riders, including Eddy Merckx, tested positive for pemoline, which is a stimulant. All riders were fined and suspended. In 2007, the UCI requested him to keep his distance from the Road World Championships due to the drug scandals he had during his career.

Eddy Merckx has been hailed by many as the greatest cyclist to have raced. He has eleven Grand Tour wins, which is a record that still stands. He has five Tours de France, five Giro d’Italias, three World Championships, and seven Milan-San Remo races being amongst the biggest races he has won. Over his career, he won 525 races, which nobody has been able to equal.

Eddy Merckx married Claudine Acou in 1967, and the couple had two children, Axel and Sabrina.

Eddy Merckx is an ambassador for the Damien the Leper Society which combats diseases, including leprosy, in developing countries.

In the world of cycling, he will not be forgotten, with the co-ownership of two tours in the Middle East, and also the Eddy Merckx Cycles brand of bicycles.