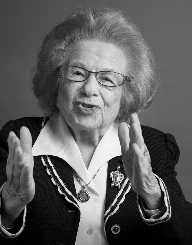 Karola Ruth Siegel was born 4th June 1928, to Julius and Irma Siegel. She was born in Wiesenfeld, Karlstadt, in Germany. She was an only child, and she born into a Jewish family. Her father was a wholesale merchant, and her mother was a housekeeper.

The Nazis took her father in early 1939. Shortly after, she was sent to Switzerland as part of the humanitarian program called Kindertransport. Her mother stopped communicating in 1941. In 1945, Westheimer discovered the Nazis killed her parents in the Holocaust.

She joined the Haganah shortly after and was based in Jerusalem. The paramilitary group trained her as a sniper and as a scout. In 1948, Westheimer fought during the Israeli War of Independence and was seriously injured. After several months of recuperation, she was able to walk again.

Westheimer migrated to France in 1950 and then moved to the U.S. in 1956. While in France, she taught psychology at one of the universities.

When she moved to America, Westheimer returned to study. In 1959, she achieved her master's degree in sociology.

In 1970, she received her degree in education.

She worked as a researcher for her postdoctoral studies, and she then became an adjunct associate professor. For the next five years, Westheimer lectured at various universities and colleges.

Life In The Media

In 1980, Dr. Ruth started her own radio show. Called Sexually Speaking, it began as a 15-minute program once a week. As a result of its popularity, by 1983 it had become the most popular radio show in the local area.

In 1984, NBC Radio took over the show, and it was syndicated right across America. They renamed it as the Dr. Ruth Show. Westheimer produced the show until 1990.

Dr. Ruth was a trailblazer with her show, making it healthy to talk about sexuality.

At the same as her radio show was running, Westheimer had her own shows on television. She started with Good Sex! With Dr. Ruth Westheimer, which then expanded to become The Dr. Ruth Show.

Her second show, Ask Dr. Ruth, aired in 1987. Over the next few years, she continued to star on television on several variations of her show.

She became a household name known to everyone. Westheimer started appearing on other popular shows such as Late Night with David Letterman. She was also on The Tonight Show Starring Johnny Carson.

From 2001 to 2007, Westheimer was on Between the Lions, a children's television show.

In 2013, Westheimer had a stage production named after her. Becoming Dr. Ruth was a show based on her life story.

She also lectured at Yale and Princeton, among many other universities.

Between 1983 and 2018, Westheimer wrote 41 books on romance and sexuality. In 1988, she published her autobiography, called, All in a Lifetime: An Autobiography.

Westheimer received the Leo Baeck Medal in 2002. The award was for humanitarian work.

Although she had two earlier marriages, Westheimer's third marriage was in 1961. She married Manfred Westheimer, and they were still together at the time of his death in 1997.

Westheimer has a daughter named Miriam, and a son named Joel.