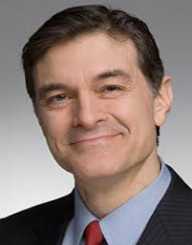 Mehmet Cengiz Oz was born on June 11, 1960, in Cleveland, Ohio, United States. He is a Turkish-American television personality and heart surgeon famously known as Dr. Oz. He rose to fame when he made regular appearances on the ‘Oprah Winfrey Show.’ He also appeared as starring in his health television series known as ‘The Dr. Oz Show.’

Dr. Oz was born Mehmet Cengiz Oz to Turkish immigrants Mustafa Oz and Suna Oz. He was born on June 11, 1960, in Cleveland, Ohio, United States. He went to Tower Hill School in Wilmington, Delaware in his teens.

Oz later enrolled at Harvard University to study biology and graduated with a bachelors’ degree in biology in 1982. He then studied at the University Of Pennsylvania School Of Medicine from where he received his MD in 1986.

The same year he also received his MBA from Penn’s Wharton School. While in college he earned the Captain’s Athletic Award for leadership. In his years at the medical school, he served as class president and student body president.

Dr. Oz began his career as an exceptional surgeon and specialized in heart transplants. His first procedure as a surgeon was when he conducted a successful operation on a patient despite the patient’s family religious beliefs that never allowed a blood transfusion. In 1994, he founded his medical institution at New York Presbyterian Hospital known as the Cardiovascular Institute and Integrative Medicine Program.

While exploring his career as a surgeon, he was inspired to co-write a book alongside his wife entitled ‘Healing from the Heart: A Leading Surgeon Combines Eastern and Western Traditions to Create the Medicine of the Future.’ The book was released in 1998 gaining much acclaim.

He also started the television show ‘Second Opinion with Dr. Oz.’ The show was intended to expose him to the outside world as he showcased his medical skills as a surgeon. By 2003, the show had gained a wider audience featuring guest like Oprah Winfrey, Magic Johnson, Quincy Jones and Charlie Sheen among others.

After Oprah appeared in his show, the two became close and developed a working relationship. Oprah invited Dr. Oz to appear in her television series talk show known as ‘The Oprah Winfrey Show.’ He also featured in her radio talk show ‘Oprah & Friends.'

He made several appearances in the show for five seasons handling talks on health. Oprah later offered to help him in producing his television series ‘The Dr. Oz Show.’ The show debuted on September 14, 2009, and had gained the highest television ratings record within nine years.

His show also won three Emmy Awards in three consecutive years. In his show, he addressed medical matters such as Type 2 Diabetes and the use of anti-aging supplements known as resveratrol.

His other television series known as ‘Transplant’ earned him a Silver Telly Award and a Freddie. In 2011, he appeared on a show known as ‘Oprah’s Allstars’ alongside Dr. Phil and Suze Orman. The three health experts talked on issues of life, finance, and health.

Dr. Oz has co-authored several books with Michael F. Roizen including ‘You: The Owner’s Manual,’ ‘You: On a Diet,’ ‘You: Being Beautiful as well as Healing from the Heart.’ He also wrote his book titled ‘You: Having a Baby’ which was published in 2009. In his literary career as well he released the bi-monthly magazine titled ‘Dr. Oz THE GOOD LIFE.' The magazine was launched alongside Hearst Corporation on February 4, 2014.

Dr. Oz married Lisa Lemole in 1985 and together has four children. He lives in Cliffside Park, New Jersey with his family. He is currently fifty-eight years old.