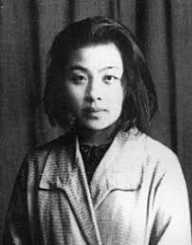 Ding Ling was a Chinese writer and political activist.

Jiang Bingzhi was born in the county of Linli, Hunan, China, on October 12, 1904. Her mother, Yu Manzhen, was a teacher and political activist. Her father, Jiang Yufeng, died when she was five years old. When she was 16, her family tried to force her into an arranged marriage. She left home and went to Shanghai. She soon after moved to Beijing. She started writing under the pen name Ding Ling.

In 1928, Ding Ling published a story called Miss Sophia’s Diary. It depicted a young woman’s thoughts regarding her unhappiness and her relationships. The story became very popular. She published several more works at the time, including Diary of a Suicide, A Woman, In the Darkness, and During the Summer Holidays. She also wrote the novels Mother and Shanghai Spring.

In 1932, Ding Ling became a member of the Chinese Communist Party. The following year, the Nationalist Party of China placed her under house arrest. She managed to escape in 1936 and went to a Communist base in the city of Yan’an.

There, she became the head of the Chinese Literature and Arts Association. She also became the editor of the newspaper literary section. In 1942, she wrote an article called Thoughts on March 8. In it, she criticized the way the Communist Party treated women. This angered the Party’s leaders, and she was forced to apologize for the article. In 1948, she published the novel The Sun Shines Over Sanggan River. The story depicted a rural village during the Communist revolution. Three years later, the book won the Stalin Prize for Literature.

Over the next few years, the Communist Party started to become hostile towards writers and artists. In 1957, Ding Ling was kicked out of the Party, and all of her works were banned. During the Cultural Revolution, she spent five years in jail. Once she got out, she was sentenced to twelve years of manual farm work. She was finally set free in 1978.

She published two more novels, named In the Hospital and When I Was in Xia Village. She also released two collections of short stories. She briefly visited the United States, where she attended the International Writing Program at the University of Iowa.

In 1925, Ding Ling married poet Hu Yepin. They had a son in 1930. The following year, Hu Yepin was executed by the Nationalist Party of China. In 1936, she had a daughter with Communist activist Feng Da. She sent both of her children to live with her mother in Hunan. In 1942, she married writer Chen Ming.