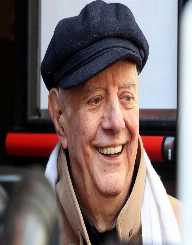 Dario Fo was born on March 24, 1926, in Santiago, Italy. His parents were Felice and Pina Rota Fo. He also had a brother, Fulvio Fo and a sister, Bianco Fo (Garambois).

When Dario Fo was a child, his family moved around a lot, which meant that he often switched schools. Even though he did not have a stable formal education, he learned a lot about the world from his intelligent family members. His father was a writer, her mother was an actress, and his grandparents were farmers. From all of these sources, he learned some important life skills.

In 1940, he enrolled in the Accademia di Belle Arti Brera. However, Dario Fo did not stay here for long before being drafted into the Italian Army (lead by the infamous Mussolini). After the war, he returned to the same school and also enrolled in the Politecnico di Milano, where he studied architecture. However, he dropped out of these schools before earning any sort of degree.

During World War II, Dario Fo was drafted to serve as a part of the fascist Italian Army. However, Fo was not a fascist, and he hated serving in the military for this cause. However, he used his forced military position for a good cause.

Near the end of the war, Fo deserted his post and hid away in an attic for the rest of the war. After the war, he was deeply traumatized and started therapy.

In the early 1950’s, Dario Fo made a career out of telling stories, mostly in the theaters in Italy. He was not writing at this point, though. In 1955, he moved to Rome and began working as a screenwriter. The first movie he ever wrote for was Rosso e Nero. He continued to write films throughout the 1950’s. He also tried his hand at acting, only to find out he was much better at writing. (However, he still acted in many of his plays.) Still, he acted as several bit characters during his career as a screenwriter. Near the end of this decade, Fo and his wife started their theater group called Campania Dario Fo-Franca Rame.

The 1960’s were also a very productive time for Dario Fo. He wrote both plays, television shows, and movies during this time. One of his most famous plays from this decade was Isabella. Some of his other famous works from this decade are Alaston mies ja mies frakissa and Lik til salgs. Near the end of this decade, he founded a second theater company: Associazione Nuova Scena.

In 1970, Dario Fo opened up yet another theater company: Collettivo Teatrale La Comune. He wrote only a couple of films during this decade: De man in rok en de man Zonder and Als schilders konden spreken. He was much more focused on this plays during this time, many of which had political themes. These themes got him and his wife in trouble. His wife was even kidnapped and toured in 1973 because she was deeply involved with political activism, which some Italians did not like.

Even after dealing with threat after threat, Dario Fo and his wife kept making political plays and films. At this point, they were not only bothering Italians with their works but many other European countries, as well as the USA. They were even banned from the USA, as the country thought they were terrorists (which they were not). In fact, the 1980’s were some of Fo’s most productive years in both film and plays. Some of his works from this time were La Comedia, Offene Zweierbeziehung, and Het Eerste mirakel van kindeke Jesus.

The 1990’s were a slower time for Dario Fo. He only wrote two plays (that were later made into tv or movies)  in this decade: Muerte accidental de un anarquista and Não Se Paga! Não Se Paga!

The 2000’s up until he wrote his last film (La puta en el manicomio) in 2015 were also productive. Even in his later years he was still writing films and plays with themes of political change. However, over his decades of writing, the themes changed with the times.

Some of his most famous works are listed below.

During his lifetime, Dario Fo also published some books. Many of these books had themes of political change, like his plays. Some of his most famous books are listed below.

All of Fo’s awards are for his writing, both in books and in films. Some of his most prestigious awards are listed below.

Dario Fo married Franca Rame in 1954. Together, this couple had one son together: Jacopo Fo. The marriage ended in 2013, with Rame’s sad death. Her cause of death was likely just old age. Their son now also works as a writer, actor, and activist, just like his parents did.