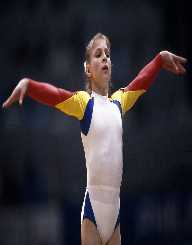 Daniela Silivas is a former Romanian gymnast, famous for winning six medals at the 1988 Olympics. Currently, she is a gymnastics coach.

Viorica Daniela Siliva? was born on May 9, 1972, in Deva, Transylvania. She was handpicked by Béla Károlyi, a famous gymnastics coach when she was six years old, during a selection process in 1981.

Daniela Silivas trained at school No. 7, training under Ion Carbine can after Béla Károlyi defected to America. When the national training center started, she was one of the early entrants.

During her school years, Daniela Silivas was active in the school’s championships. She was the Romanian junior national champion in 1981 and 1982. Daniela Silivas continued to compete until 1984, competing in Junior European Championships and Junior Friendship Tournaments.

Daniela Silivas won balance beam, uneven bars, and floor exercise; she was fourth in the all-around. It was at the championships where she met Svetlana Boguinskaya, Aurelia Dobre, and Dagmar Kersten.

The Romanian Gymnastics Federation changed Daniela Siliva?'s birth year from 1972 to 1970, so that she was eligible for the 1985 World Championships in Montreal. Daniela managed to score a perfect ten in the balance beam and was a winner of the title in 1985. She finished behind the defending co-world champion Yelena Sushunova in 1986.

In 1987, Daniela Silivas won the individual all-around, balance beam, floor exercise, and the uneven bars, she even took silver on the vault, in the European Gymnastics Champions, Moscow.

The same year, Daniela Silivas help her team win the team title for the World Championships in Rotterdam. But she had fallen off the balance beam and did not perform well on the uneven bars. Even so, Daniela won bronze.

Daniela Silivas and the Romanian team members participated in the Seoul 1988 Summer Olympics. Daniela, Yelena ShushunYelena Shushunovaova, and Aurelia Dobre were favorites for the all-around title, as they had performed well the year before in the European Championships.

In the end, it was a competition between Daniela Silivas and Yelena, as both had perfect tens on the floor; Yelena scored the second perfect on the vault, and Daniela countered it on the uneven bars.Daniela dropped to second place after losing 0.025 points on the vault, gaining silver.

Despite losing to her teammate, Daniela Silivas managed to win three gold medals and bronze on the vault.

Hence, Daniela Silivas was the only gymnast to win a medal in every event in all three competitions, which was a team, all- around and event finals. Plus, Daniela also had seven perfect ten scores in the game, to match Nadia Com?neci'.

Daniela Silivas repeated glowing performance despite a knee injury in 1989. She had managed to defend her title on the floor exercise, reigning champion at the 1989 Stuttgart World Championships, She won gold on the uneven bars and beam in the event finals, and was placed silver in the all- around.

Daniela Silivas injury caused her to end up 12th on the balance beam. After the competition, Daniela went to France for knee surgery, which was financed by the French Gymnastics Federation.

Romania underwent a political revolution between 1989 and 1990, closing the gymnastics program officially. In return for funding Daniela Silivas knee surgery, the members of the French national team could train at Deva.

Daniela Silivas surgery and closing of Deva’s gymnastics program meant she was unable to train for the 1990 World Championship in Belgium. In 1990, she announced her retirement.

Daniela Silivas studied at the University of Bucharest for a year and was urged by friends to move to the United States. She arrived in August 1991 and worked in Atlanta, Georgia as a gymnastics coach. Daniela began working with the Olympic committee, to prepare for the Olympic Games in 1996.

Currently, Daniela is a Chief Manager at the Hammond Park Gymnastics in Atlanta. She is also team coach at Modern Gymnastics in Marietta.

In 2002, Daniela Silivas was inducted into the International Gymnastics Hall of Fame; she remains the youngest person to receive the honor.

Daniela Silivas married her husband Scott Harper in 2003. They had two wedding ceremonies, one in the States and another in Cetate Deva, Romania. They have two sons and a daughter together.

Daniela Silivas had two of her well-known skills named after her. One of it involves spinning on her ankles.