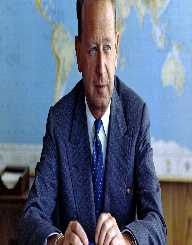 Dag Hammarskjold served as the second Secretary-General of the United Nations from 1953 till his death in 1961. He was the youngest to hold the post at 47 years of age.

Dag is one of the only four people to be awarded a posthumous Nobel Peace Prize. His term in the UN has been referred to as the most notable successes for the UN. US President John F Kennedy called him ‘The greatest statesman of the century.’

Dag Hammarskjold was born in Jonkoping, Sweden on 29 Jul 1905 in a noble family. His family was ennobled in 1610. He spent his childhood in Uppsala. His father had been the Swedish Prime Minister from 1914 to 1917.

Dag Hammarskjold studied at Katedraiskolan and then at Uppsala University. He earned a degree in Humanities in 1925. He then completed a second degree in Economics in 1928. He got his law degree in 1930 and his doctorate in Economics in 1934. He was influenced by his parents and believed in selfless service to one’s country and humanity.

Dag was appointed Secretary of the Bank of Sweden, where he remained for a year. He took up a post as Under Secretary in the Ministry of Finance where he served for nine years. In 1941 he was named Head of the Bank of Sweden. Dag was the Swedish delegate to the OEEC (organization for the European Economic Cooperation) and Cabinet Secretary to the Ministry of Foreign Affairs. His diplomatic manner and financial acumen made him an important asset to the Foreign Ministry.

When Trygve Lie resigned as UN Secretary-General in 1953, the UN Security Council recommended Dag to succeed him. He was elected on Mar 31 by a majority of 10 to 11 Security Council members. In 1937 he was reelected for another term. Dag played a major role in shaping the UN. He established his Secretariat of 4000 administrators. He set up regulations defining their responsibilities. Dag Hammarskjold term was noted for some great work. He tried to smooth relations between Israel and the Arab States.

Dag visited China in 1955 and succeeded in negotiations to release 11 captured US pilots. In 1956 he established the UN Emergency Force and intervened in the Suez crisis. In 1960 UN aid was requested to defuse the Congo crisis. The crisis was between Belgian Congo and the newly Independent Congo. His efforts were considered insufficient by the Soviet Union, and he was asked to resign. He stood firm and refused to resign and bow down to pressure. In 1961 Dag was en-route to negotiate a ceasefire when the plane carrying him crashed. There were no survivors. There was evidence to suggest that the plane had been shot down, but nothing could be proved.

Hammarskjold’s book Vagmarken (Markings) was published in 1963. It was a collection of his diary reflections. The entries started from 1925 and ended a month before his death. It had an undated letter addressed to his friend Leif Belfrage, the then Swedish Permanent Under-Secretary for Foreign Affairs with a note to publish it if he thought it was worth it.

The foreword was written by W. H. Auden a friend of Dag. His philosophy of selfless service was truly reflected in his thoughts and action.

Hammarskjold was awarded the Nobel Peace Prize in 1961, having been nominated before his death. Dag also received several honorary degrees. There are also many buildings, stadia, hostels, streets and memorials named after him. The Dag Hammarskjold library, a part of the UN Headquarters and the Dag Hammarskjold Law library in Uppsala University are a few examples.

The UN Security Council established a Dag Hammarskjold medal in recognition of those who lost their lives in UN Peace Keeping operations. Dag was the first of the three recipients. UN Postal administration issued a postage stamp. The US Hammarskjold commemorative 4 cent postage stamp was released twice because of a misprint.