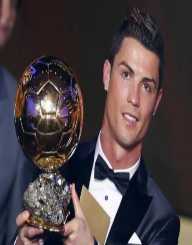 Cristiano Ronaldo is a football player playing for Real Madrid. He is also playing for Portugal National Football Team

Cristiano Ronaldo dos Santos Aveiro was born on 5 of February 1985 in Funchal, Madeira, Portugal. Born to Maria Dolores dos Santos and Jose Dinis Aveiro, he was named after President Ronald Reagan, his father's favorite actor. He has one older brother, Hugo, and two older sisters, Elma and Liliana Cátia, making him the youngest child in the family.

Ronaldo grew up in a small tin-roofed home that overlooked the ocean. He admitted being poor, sharing a room with his siblings. His father worked as a gardener and various jobs. To help keep some financial stability, Ronaldo's mother worked as a cook and cleaning person. His father also worked as an equipment manager for Andorinha, an amateur team. Ronaldo was introduced to football there, and he was a phenomenon at the age of ten.

Cristiano Ronaldo spent two years playing for the local club Nacional. In 1997, aged 12, he went on a three-day trial with Sporting Clube de Portugal. He impressed them, who signed him for a fee of £1,500, and he moved to Alcochete, near Lisbon, joining the football academy. He was expelled at the age of fourteen for disrespecting a teacher.

Cristiano Ronaldo signed with Sporting Portugal in 2001 at the age of 16. He was placed in the youth team by first-team manager László Bölöni. Ronaldo is the only player ever to play for Sporting's under-16, under-17, under-18, B-team, and the first team, all within one season. He drew the attention of Manchester United team, who had urged Alex Ferguson to sign him on.

Cristiano had expressed a wish to leave Manchester United, and for the 2009–10 season, he joined Real Madrid for a world record transfer fee of £80 million. His contract, which ran until 2015, was worth €11 million per year and contained a €1 billion buy-out clause. Real Madrid had agreed to pay the total for the transfer.

Moments, his autobiography, was published in December 2007. The television film Ronaldo: Tested to the Limit, was sponsored by Castro, where he is physically and mentally tested in several fields. September 2011 saw the release of Cristiano Ronaldo: The World at his Feet, a documentary narrated by the actor Benedict Cumberbatch.  Ronaldo, a documentary film about him, was released worldwide on 9 November 2015.

Cristiano also owns a fashion and perfume line. His label is CR7, initials of his name and his shirt number.

Cristiano Ronaldo became a father on 17 June 2010 following the birth of a son named Cristiano. The child was born in the United States, and Ronaldo announced that he had full custody, although he never revealed who the mother was. His father died of liver failure due to alcoholism in 2005, and in 2007 his mother struggled and survived breast cancer.

Cristiano Ronaldo is a Roman Catholic. He donates blood regularly. Hence he does not have a tattoo.

In the 2004 Indian Ocean Earthquake & Tsunami, Cristiano Ronaldo raised funds for rehabilitation and reconstruction. 2012 Cristiano sold his golden boot for €1.5 million to fund schools for children in Gaza. December 2012, joined FIFA's '11 for Health' programme to raise awareness on how to steer clear of conditions including drug addiction, HIV, malaria, and obesity, aimed at kids. In November 2014, he was in FIFA's "11 against Ebola" campaign, done together with Confederation of African Football to raise awareness of the disease and ways to combat it. In August 2016, he launched CR7Selfie, a selfie app for charity to help Save the Children.

He had the most European Golden Shoe awards: 4
The most expensive footballer in history: transfer from Manchester United to Real Madrid
Only player to win the League title, Domestic Supercup, Domestic Cup, Champions League, Club World Cup, League Player of the Year, Golden Shoe and Ballon d'Or at two different clubs (Manchester United and Real Madrid), first and only player to appear in the FIFPro World XI for two different clubs. Single player to have won more than one FIFA Club World Cup Silver Ball.