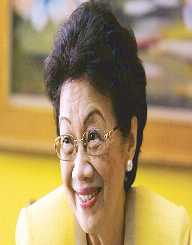 Corazon Aquino was a Filipino politician who served as the country’s president from 1986 to 1992.

Aquino was born as Maria Corazon SumulongCojuangco on 25 January 1933. She was born to José Cojuangco and Demetria née Sumulong. Her father had been a congressman, and her mother worked as a pharmacist. Her family was quite prominent, but two of her eight siblings died in infancy. Aquino was born in Tarlac and attended school in Manila. She studied at the Catholic elementary and high schools. The family moved to America and Aquino attended Notre Dame Covent School. Aquino studied mathematics and French in college. Aquino returned to the Philippines and studied law.

While studying at Far Eastern University, she met Ninoy Aquino. The two married in 1954 and Aquino abandoned her law studies and became a housewife. Ninoy was a politician and became mayor of Concepcion at the age of 22. He then became the youngest governor in the Philippines when he became governor of Tarlac. Ninoy and Aquino had five children together, Maria, Aurora, Benigno, Victoria, Elisa, and Kristina. Aquino raised the children and hosted parties but was largely bored by provincial life. In 1967, Ninoy became a senator and began to make an enemy of the Filipino president, Ferdinand Marcos. Ninoy was a member of the Liberal Party and accused Marcos of developing a dictatorship.

In 1973 Marcos suspended elections and created a new constitution. Marcos declared martial law and began a crackdown against his opponents. Ninoy was imprisoned. Despite being in prison, he contested the 1978 elections but was defeated. Ninoy and his family were offered amnesty in exchange for exile in 1980, and he and Aquino moved to America. Ninoy remained a supporter of the Muslim and communist insurgencies. In 1983, Ninoy attempted to return to the Philippines, but presidential forces at Manilla airport murdered him. After her husband’s murder, Aquino returned to the Philippines to take charge of her husband’s funeral. Aquino took up her husband’s mantle of opposition to Marcos’ rule.

Aquino had her first foray into politics in 1948, while she was living in America. Aquinos worked as a volunteer on the presidential campaign of a Republican candidate, Thomas Dewey. In the Philippines, Aquino gained national prominence after the death of her husband. She made her first public speech at his funeral, which was attended by two million people. Aquino became politically active and was involved in anti-government protests. She became a rallying point for many anti-Marcos groups. Marcos declared there would be a presidential election in 1986. Aquino reluctantly agreed to stand for election. With the leader of the United Opposition Party Aquino stood as the opposition candidate for president. The election saw widespread violence and fraud. Marcos was declared the winner of the election.

Aquino led a protest against the result and was joined by the Catholic bishops and the U.S in rejecting the legitimacy of the result. The tide turned when members of the military began to defect from Marcos to Aquino, and on the back of mass protest, she was carried to power. Once in power, Aquino started a series of reforms. She tore up the 1973 constitution, and it was replaced by a 1987 constitution which emphasized justice and human rights. Aquino declared her government a revolutionary government and began purging those perceived as Marcos supporters from the governor and mayoral positions. Aquino was also faced with tackling the major economic problems faced by the Philippines. The country was gravely indebted to the U.S.

Aquino agreed to honor the debt and worked to boost investor confidence in the Filipino economy. Aquino managed to lower the debt to GDP ratio, while also raising the income per capita and the number of total exports. Aquino focussed on the privatization of bad government assets and breaking up the cronyism that had run rampant under Marcos rule. Aquino also demanded that the U.S end its military presence in the Philippines. The U.S refused at first, but their bases were destroyed in a volcanic eruption in 1991 forcing them to abandon their positions.

Aquino also led a land redistribution programme during her reign. Large landowners had their land bought out by the government and redistributed to tenant farmers. Despite her successes, some problems beset Aquino’s government. Inflation remained as high as nine percent throughout her presidency. The cities of the Philippines suffered numerous blackouts during the Aquino presidency as it failed to update the country’s archaic power grid. Some natural disasters also struck the Philippines.

In 1990 it suffered an earthquake, and this was followed by the eruption of Mount Pinatubo and a destructive tropical storm that caused widespread flooding. Great controversy occurred in 1987 when government forces gunned down agrarian protesters in Manilla. The massacre led to some resignations from the government. Following the end of her term in 1992, Aquino declined to stand for re-election. Instead, she threw her support behind her defense secretary, Fidel Ramos. Ramos won the election and succeeded Aquino as president of the Philippines.

Aquino remained vocal on political issues but did not take another political position. In 1997 she led protests against President Ramos’ attempts to extend his rule into another term. Aquino again protested the actions of a sitting president in 2000; she led marches against the alleged corrupt dealings of Joseph Estrada. She later apologized for being part of the protests against Estrada as they paved the way for Gloria Macapagal-Arroyo to rise to power. Aquino accused Macapagal-Arroyo of undermining the constitution.

In March 2008 it was announced that Aquino had colorectal cancer and had been given three months to live. She underwent chemotherapy treatment but her condition worsened and the treatment ended in 2009. Aquino died on 1 August 2009. Ten days of mourning were announced across the country. Global leaders also praised Aquino in the U.S, Russia, U.K and South Africa.