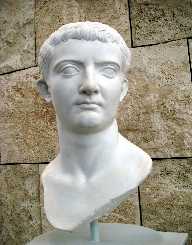 Claudius (full name Tiberius Claudius Caesar Augustus Germanicus) was born on 1st August, 10 BC, as the son of Nero Claudius Drusus, a Roman general, and his wife, Antonia. He had two siblings. Claudius was the nephew of Emperor Tiberius. While he was still a child, his father died, and therefore Claudius was raised by his mother.

During his childhood, Claudius was often sick and developed a limp. He was also slightly deaf due to an illness. Claudius was also very clumsy and was considered unattractive. His family felt that he was an embarrassment and shunned him. Later it became evident that Claudius was brilliant and he was interested in scholarly pursuits. Several tutors educated him on history, philosophy, and other topics.

Since Claudius had several disabilities, he never took a prominent position in the Roman Republic. On several occasions, Claudius asked his uncle the Emperor for a political job but was always turned down. However, Claudius was granted consular ornaments. When Tiberius died, Emperor Caligula took over the power. The new emperor recognized the potential of young Claudius and appointed him as a co-consul. Despite giving him this position, Caligula often tormented and humiliated Claudius in front of the Senate.

When Caligula was assassinated in the conspiracy of Cassius Chaerea and several senators, amongst several other noblemen, Claudius fled into hiding. When the Praetorian guards found him, instead of killing Claudius, they made him the new Emperor.

Claudius was initially believed to be a weak and incompetent emperor. However, over time it proved that he was an intelligent and efficient administrator. The Roman Empire experienced a vast expansion under his reign. In 43 AD, Claudius launched a mission to conquest Britain and dispatched a force of 40,000 troops across the English Channel. His troops established a potent force in the territory.

After the conquest of Britain, Claudius visited the land for a brief time. He then established the Colonia Claudia Victricensis as the provincial capital of the province of Britannia. He also conquered Mauretania, Thrace in the Balkans and Lycia of Turkey.

Claudius emphasized the importance of public works and infrastructure development. He built the aqueducts Aqua Claudia and the Anio Novus, as well as several roads and canals in Italy. The judicial system also experienced significant improvements, and Claudius himself acted as a judge in many legal cases. He also worked on the rights of sick slaves, which stated that masters who choose to kill their sick slaves instead of treating them should be charged with murder. Claudius was also an avid writer. His best-known works include works on Etruscan and Carthaginian history, as well as an Etruscan dictionary.

Claudius was a womanizer and was easily manipulated by women. He was married four times. With his first wife PlautiaUrgulanilla, he had a son. He divorced her for adultery and married to AeliaPaetina, with whom he had a daughter. His third wife was Valeria Messalina, but the marriage ended due to her numerous affairs. With Valeria, Claudius had two children. His last marriage was to Agrippina the Younger.

Claudius died on October 13, 54 AD. It is believed that he was poisoned to death, possibly by his wife, Agrippina.