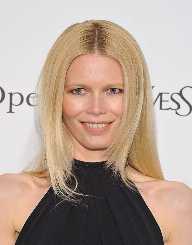 Claudia Schiffer is a stunning, world’s most successful model who rose to fame in early 1990’s. She is recorded in the Guinness Book of World Records for appearing in more than one thousand magazine covers.

Claudia Schiffer is a daughter of Gurdun and Heinz Schiffer born on August 25, 1970, in Duisburg. She can communicate fluently in three languages, French, English, and German.

Initially, Claudia Schiffer aspired to be a lawyer and initially worked in her father’s law firm. However, in 1978 the Head of Metropolitan Model Agency, Michel Leviton, spotted her in a nightclub and signed her as a model.

She also met Patrick Lafontaine who connected her with Elite Model Management. After completing her high school, she took a flight to Paris where she had a photo-shoot and made an appearance on the cover of Elle magazine.

Claudia Schiffer also starred in in campaigns for ‘Guess?’ and made several other appearances such as the cover of British Vogue, and became the face of ‘Chanel.' Later in May 1997, she appeared on the cover and pictorials of ‘Playboy.’

The 1999 millennium cover of ‘Vogue’ featured her and named her as one of the most beautiful women in the world. She also appeared on several other magazine covers including, ‘Vanity Fair,' ‘Cosmopolitan,' ‘People,' ‘Time’ among others and modelled for numerous fashion houses such as ‘Versace,' ‘Chloe,' ‘Christian Dior’ ‘ L’Oreal’ and ‘Yves Saint Laurent.’

Additionally, Claudia Schiffer appeared in advertising campaigns such as ‘Chanel,' ‘Versace,' ‘Blumarine,' ‘Prada’ ‘Guess?’ , ‘Intergaz’ among others. She also made appearances on the face of high selling retailers such as ‘Mango’ and ‘Accessorize’ and endorsing luxury brands.

During the 2006 winter, Claudia pierced her ears for the first time to make an Autumn/Winter accessorise campaign. To date, she still holds a contract with L’Oreal as the longest standing ambassadors. In 2011, she served as a judge on ‘Fashion Fringe’ and in 2012; she modelled during the 30th Anniversary of the brand ‘Guess?’

Other than modelling, Claudia Schiffer has launched several collections of fashion designs including, ‘Cashmere collection’ which she started during the Paris Fashion Week in March 2011. She also released her fashion designs for the autumn to winter seasons followed by spring to summer 2012 collection.

In her acting career, Schiffer made her first performance in a 1994 children’s movie titled, ‘Richie Rich.' In 1997, she starred alongside Dennis Hopper and Matthew Modine in the film, ‘Blackout.’ This performance followed her role in, ‘Friends and Lovers’ and ‘Black and White’ in 1999.

By the year 2001, Claudia Schiffer acted in the films, ‘In Pursuit,' ‘Love without Dick’ and made a cameo appearance in ‘Ben Stillers Zoolander’ and ‘Love Actually in 2003. Notably, she has also appeared on several shows including ‘The Oprah Winfrey Show,' ‘The Jonathans Ross Show’ and ‘Sitcoms ‘Dharma and Greg and Arrested Development.

Claudia Schiffer has also made cameo appearances in music videos such as West life’s single ‘Uptown Girl,' Bon Jovi's, ‘Say it isn’t so’ and charity single, ‘Comic Relief.’ Schiffer is a member of the Arts and Entertainment Support Committee for UNICEF and is currently the Goodwill Ambassador of the UK organisation. She also appeared in the Click campaign and presented during the Edinburgh Live 8 and Berlin concerts in 2005.

In 1995, Schiffer jointly owned chains of restaurants called Fashion Café with her fellow models, Elle Macpherson, Christy Turlington and Naomi Campbell. During the 2006 World Cup, Schiffer alongside Pele carried and presented trophies to winning teams and also in the year 2002, she gave Prince William with a Polo trophy.

In January 1994, Claudia Schiffer became engaged to David Copperfield. Alongside her fiancé, she guest appeared in films such as ‘Guillotined’ and ‘Sawn in half’ and characterised the role of a reporter interviewing him for the documentary, ‘David Copperfield: 15 Years of Magic’. Their relationship ended in 1999 due to work schedules.

In 1997, Copperfield and Schiffer sued the Paris match magazine for writing that their relationship was a sham and Schiffer was under a paid contract to be his companion. Shortly after the breakup with Copperfield, she had a short relationship with Tim Jefferies until it ended in 2000. On May 2002, Claudia Schiffer married Matthew Vaugh, and the couple has three children, a son named Caspar, and two daughters, Clementine and Cosima.