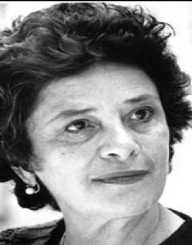 Claribel Alegria was an author and poet from Nicaragua.  She became the voice of Central American literature with more than 40 books of poetry, fiction, and historical “testimony”.

In the early 1940s, Claribel Alegria moved to the United States.  She attended George Washington University.  She was mentored by Spanish poet Juan Ramon Jimenez.  She graduated in 1948 with a bachelor's degree in philosophy and letters.

Claribel Alegria published her first book of poetry “Anillo de Silencio” (Ring of Silence) in 1948 with the help of Jimenez.  For many years, she lived abroad from Mexico, Chile, and Uruguay to Majorca and Paris.  During this time, she and her husband co-wrote “Cenizas de Izalco” in 1966.  It was later published in English under the 1989 title “Ashes of Izalco”.

Claribel Alegria and her husband returned to live in Nicaragua in the 1980s when she could not return to El Salvador.  They continued to write.  Some of her writings were collaborations with her husband, Darwin J. Flakoll.  Often she wrote about the struggles for liberation in both Nicaragua and El Salvador. Including Death of Somoza about assassinated Nicaraguan politician Anastasio Somoza and Tunnel to Canto Grande about the 1990 escape of political prisoners in Peru.  Many of their collaborations were about the Sandinista National Liberation Front that was in power in Nicaragua.

Claribel Alegria was able to return to El Salvador in 1992 after the civil war ended.  She lived in Nicaragua until her death.

While at the university, Claribel Alegria married Darwin J. Flakoll in 1947.  He was an American journalist and diplomat.  The couple had four children, Maya, Patrician, Karen, and Erik.  Flakoll died in 1995.

Claribel Alegria died on January 25, 2018, in Managua, Nicaragua at the age of 93.  The cause of death is reported as a lung infection.

Claribel Alegria spoke out about the violence that was taken over her homeland.  In 1980, after the assassination of El Salvador Archbishop Oscar Arnulfo Romero, she raised her voice about the violence that was led by the military government supported by the United States.  Claribel Alegria could not go back for 12 years during the country's civil war, even when her mother died in 1982.