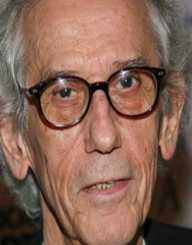 Christo Vladimirov Javacheff was born 13th June 1935, to Vladimir Javacheff and Tsveta Dimitrova. He was born in Gabrovo, Bulgaria. His father managed a fabric factory, and his mother was the secretary at the Academy of Fine Arts in Sofia.

Christo enrolled at the Sofia Academy in 1953 and studied art until 1956. He then spent a year in Prague, Czechoslovakia. In 1957, he bribed a railway official to allow him to hide on board a train carrying medical supplies to Austria. He settled in Vienna and continued his studies by enrolling at the Vienna Academy of Fine Arts.

A year later, he travelled to Geneva, and from there he went to Paris. Christo had a difficult time in Paris as he had to learn French and found it very difficult. He painted portraits to earn a living.


Meeting and Marriage to Jeanne-Claude

A career with Jeanne-Claude

In 1961, they worked on their first artistic collaboration together. They covered barrels at the port of Cologne. Their second project in 1962 brought attention to them as they blocked a street called Rue Visconti, to highlight their opposition to the Berlin Wall.

Two years later, they moved to the U.S., arriving in New York City. They had no money and Christo’s English was not very good, but he managed to get his work displayed in various galleries, including the Castelli Gallery in New York.

Christo also began to build storefronts, which he did to scale, and as they sold, it provided finance for other projects.

Christo and Jeanne-Claude became known for their environmental works of art. In 1968, they participated in Documenta 4, which would become the most massive inflatable structure created with no skeleton. The project cost USD 70,000, which the couple financed from selling artworks and storefronts.

In 1969, they were invited to Australia, and their work was to wrap the coast of Little Bay, in Sydney, in synthetic fabric. It took over 100 people approximately 17,000 hours to work on the project, which took 95,000 meters of fabric and 56 kilometers of rope.

More recently, they have created The Mastaba. It was exhibited from June to September in 2018, in London. It was made from over 7,000 oil barrels and is in the shape of a mastaba, which is an ancient Egyptian tomb. At the same time, the Serpentine Gallery, situated just nearby, is exhibiting works from the couple ranging through their artistic careers from 1958 until 2018.

Since 1972, Christo and Jeanne-Claude have worked with Wolfgang Volz as their exclusive photographer. They have also had documentaries made on several of their large-scale projects. For many years, the only name to go on their artwork was Christo. This was due to female artists not being accepted the way males were. It wasn’t until 1994 that they announced Jeanne-Claude as the second half of the duo.

Over the years, Christo and Jeanne-Claude worked on many large-scale environmental artworks, costing huge amounts of money and taking many people to create and years to plan, but the couple always succeeded in getting their works done which is a credit to their love of their art.

Among their awards and honors, are the following:

2006: Awarded Best Project in a Public Space at the AICA-USA Awards (for The Gates)

2011: Elected into the National Academy of Design