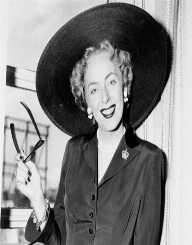 During World War II (1939-1945), Christine Jorgensen was drafted into the US Army. During her time in the army, she discovered an article about a Danish doctor, Christian Hamburger who was experimenting with gender therapy on animals using hormones. Jorgensen received an honourable discharge from the army in 1946.

In 1950, Christine Jorgensen went to Denmark on the pretext of a family visit where Dr. Hamburger assessed Jorgensen as transexual, the first physician to have done so. The initial treatment was a course of female hormones, and during this time, Hamburger recommended that Jorgensen assume a female identity and to begin dressing as a woman. Before sex reassignment surgery was carried out, Jorgensen was assessed by psychologist Dr. Georg Sturup.

After 12 months of hormone therapy, Jorgensen underwent the first of the sex reassignment surgeries. After the Daily New York News did a cover story on Jorgensen, she became a celebrity in the United States. Because of the interest, the New York Daily News article had generated, Jorgensen wrote an article for The American Weekly entitled The Story of My Life.

Upon her return to the United States in 1952, she was met by fans and journalists at the airport in New York.  Her parents were supportive of her decision. Both the public and media were said to have treated Jorgensen with curiosity and respect.

Hollywood was also supportive of Christine Jorgensen, and she was offered both film and theatre contracts, she was also invited to celebrity events and parties. She made a good living as a nightclub singer and actress. Before her death, she went to Denmark where she had a reunion with the medical staff who had assisted her in the early 1950s.

The Scandinavian Society of New York named Christine Jorgensen Woman of the Year. Jorgensen was inducted into the Legacy Walk in 2012.