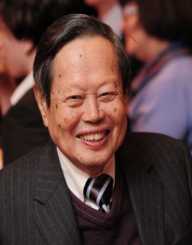 Chen-Ning Frank Yang, a Nobel Laureate Chinese Physicist, was born on October 1, 1922, in Hefei, Anhui Province, China. Also known as Yang Zhenning and Frank or Franklin, he was the first of five children of Yang Wu-Chih and Luo Meng-Hua. His father was a Professor of Mathematics at ‘Tsinghua University’ in Beijing, and his mother was a housewife. Yang was brought up in the tranquil and pedagogically inclined environment of the sprawling Tsinghua University campus and completed his elementary and high school education attending schools in Beijing while staying at the campus. In the autumn of 1937, he along with his family moved to Hefei after the Japanese invasion of China.

Chen Ning Yang was awarded a scholarship from the Boxer Indemnity Scholarship Program funded by Boxer Rebellion indemnity money paid to the United States that had the provision of financially supporting Chinese students who intended to study in the United States. Yang could not depart for the U.S. immediately after the grant of scholarship due to the ongoing World War II. He had to wait for the war to end and in the meantime worked as a middle school teacher and studied field theory.

Chen Ning Yang worked as an assistant to Professor Enrico Fermi at the University of Chicago for one year before moving to Princeton, New Jersey, where he was invited to do his research at the Institute for Advanced Study. In the Institute, he got associated with Tsung-Dao Lee, whom he knew from his Kunming days, and collaborated with him in the research works. In 1952, he was made a permanent member of the Institute, and in 1955 he received the status of a full professor. Princeton University Press published his textbook ‘Elementary Particles’ in 1963.

Chen Ning Yang joined the Stony Brook University in New York in 1965 where he was designated as the Albert Einstein Professor of Physics. He was also made the first director of the newly founded Institute for Theoretical Physics. The Institute was later named in his honor as the C.N. Yang Institute for Theoretical Physics. In 1999, he retired from the Stony Brook University and became its Professor Emeritus.

Chen Ning Yang became a U.S. citizen in 1964 and visited China in 1971 after normalcy started to restore in the relationship between the United States and China. The Chinese Physics community was in bad shape due to the onslaught of the ‘Cultural Revolution,’ and Yang focused his attention on rebuilding the research atmosphere destroyed by the radical political movements and spared no effort to re-establish the required environment.

Chen Ning Yang became an honorary director of the Tsinghua University, Beijing after his retirement from the Stony Brook University. He also holds the position of the Huang Jibei-Lu Kaiqun Professor at the Center for Advanced Study (CAST) and is a distinguished Professor-at-Large at ‘Chinese University of Hong Kong.’ He is an adjudicator in one of the two Shaw Prize as a founding member of the Board of Adjudicators. Yang is also an expert writer, and many of his articles are published in various journals.

Chen Ning Yang received the 1957 Nobel Prize in Physics jointly with Tsung-Dao Lee for their work on parity nonconservation of weak interaction. In the same year, he was chosen as one of the Ten Outstanding Young Americans.

Chen Ning Yang was bestowed with honorary doctorate degrees by Princeton University (1958), Moscow State University (1992) and the Chinese University of Hong Kong (1997). He was the recipient of the Rumford Prize in 1980. Yang received the ‘National Medal of Science’ in 1986. He was awarded the Oskar Klein Memorial Lecture and Medal in 1988.

Chen Ning Yang was conferred with the Benjamin Franklin Medal for Distinguished Achievement in the Sciences of the American Philosophical Society in 1993. Yang also received the following awards: Bower Award (1994), Albert Einstein Medal (1995), Lars Onsager Prize (1999) and King Faisal International Prize (2001). He was also elected a Fellow of the American Physical Society, the Chinese Academy of Sciences, the Academia Sinica, the Russian Academy of Sciences, and the Royal Society.

Chen Ning Yang started to reside in China from 2004 when he was granted a permanent residency in his native country. He became a citizen of China after renouncing the U.S. Citizenship on September 30, 2015, and presently resides in China. He is an agnostic in his religious view.