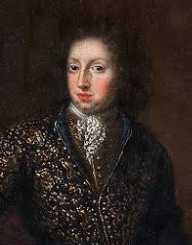 Charles XI was born to King Charles X Gustav and Queen Hedwig Eleonora of Holstein-Gottorp on November 24, 1655, in the Stockholm Palace. Charles did not see his father for four years as he went to lead the war effort.  Upon his return, in 1659, the King relocated his family Riksdag of the Estates in Gothenburg.

It was there that King Charles X Gustav died after falling ill in February of 1660. Before his death, he drafted and signed his testament, making arrangements for his four-year-old son.  These arrangements were necessary, as they controlled his young life.

Life After the Death of King Charles X Gustav

Following his demise, the army was under the command of his younger brother Adolphe John I, Count Palantine of Kleinburg. Adolphe also received a council seat. During his son's younger years, until such time, his son would ascend the throne to be King, Queen Dowager Hedwig Eleonora, acted as regent and also chair of the six-member Registry Council. In addition, the King gave his wife, two votes, and a final say on the decisions made by the council. Despite the council voicing a challenge to the terms and validity of the King's wishes, they remained unchanged.

Charles was taught by the governesses his mother hired. As a teenager, he was very active. He liked to play sports, exercise, and to go bear-hunting. He was good at those activities while struggling with his school lessons. He had dyslexia.

When Charles was 17 years old, the age of "majority" or the period when he ascended the throne. This Charles did on December 18, 1672. Soon after Charles was crowned King, he became involved in military conflicts. These came about due to his countries acquiring new territories.


Charles Life as King of Sweden

People considered Charles to be illiterate and ill-spoken, this bolstered by the fact that the only language he knew besides Swedish was German. When he had to deal with other diplomats, he used the people in his council or his mother who spoke the language as interpreters.

Upon taking over through the country of Sweden, it was in financial straits; this occurred in the 1660s and had worsened by the time he took the throne. To aid in the continuation of Sweden, to protect its borders and provide the country with financial stability, Charles's guarding arranged an alliance between two kingdoms. The partnership with France in 1671 gave Sweden an ally in the event of a war; it also helped to provide better finances in Sweden through money from France.

It also involved them in France's war with the Dutch in 1692 with whom the country was fighting upon the coronation of Charles. In the spring of 1674, Sweden joined the battle.

In the spring of 1674, at Brandenburg, Sweden joined the war in support of its ally, France. At this time, Denmark, a partner of the Hapsburg Holy Roman Empire, was threatening another conflict; this again caused Sweden to be ready for another war. Once the war began, things changed.

To secure peace and to end the war, an envoy in 1675, suggested that Princess Ulrika Eleonora of Denmark wed King Charles XI to end the conflict between the two. And in mid-June of 1675, the couple announced their engagement. While this was going on, Sweden lost the Battle of Fenbellin. Soon after that, in September, King Christian V declared war on Sweden.

It was at this time that the King began to rule alone because the Swedish Privy Council was breaking down. He decided to form a camp, also in the fall of 1675, in Scania; this was to prepare the Swedish nation for war in the Scanian War. The Danish of Denmark was better equipped and had more numbers.

Although Sweden didn’t win many battles under Charles XI, the country did win some. Sweden won the Battle of Halmstad on August 17, 1676, defeating the Danish. The next significant win occurred in the Battle of Lund at the Kavlinge River near Lund. On December 4, 1676, the Swedes sprung a surprise attack against the Danish, in the fight that decided who controlled Scania.

The third significant battle won by Sweden was the Battle of Landskrona very soon after its end, Christian V left to go to Zealand.

To prevent further fighting and bloodshed in 1679, Louis XIV of France brokered an agreement to agree to bring both Denmark and Sweden to the table to form a contract. The deal left the Swedish empire intact, protecting through three treaties. All three signed in 1679:  first was Fontainebleau, followed by Lund and then German-en-Laye.

After the end of the war, Charles gained a better understanding of foreign affairs so that he could control them better. During this period, he promoted stability in the economy and a reorganized military.

His 20-year reign, which lasted in peace, began.

Following the war, Sweden still experienced money problems. Thus in October 1680, he started the Riksdag of the Estates or "the reduction ordeal." The Riksdag of the Estates allowed the government to take back what it had previously granted. It included land, money, and titles. All of this resulted in a better financial position is that it of Sweden.

Charles XI was a religious man. A law created in February of 1686, actually stated in its records that the King's law prevailed even in matters relating to the church. An interesting note here is that it became a crime to not go to church punishable by arrest.

On May 6, 1680, Charles Xi married Ulrika Eleonora of Denmark, who was the daughter of King Frederick III of Denmark, with whom he had seven children. The children were:

It is stated that the King loved her and mourned her death. The people thought she was kind as well. She liked to read, and art, but was always ill due to her many pregnancies. She is known to have supported people in the kingdom with her own money.

Death of the King

Throughout his later life, Charles XI complained of stomach pains that doctors could not find the cause of. He received treatment and sent home. The pains started in 1694 and worsened in the summer of 1696. But, in February of 1697, he returned to Stockholm to consult a doctor. The doctors there found a lump in his stomach, and they could not remove it. So they made him comfortable until his death. Charles XI died on April 5, 1697, at age 41.