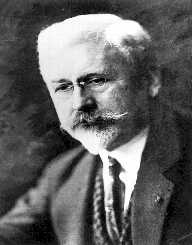 Charles Édouard Guillaume was born on February 15th, 1861. His place of birth was in Fleurier in Swiss-Jura.  His father Édouard owned a Watch business in London before moving it to Switzerland. He finally settled in Fleurier.

Charles Édouard Guillaume earned his elementary education from Neuchâtel. He later joined Zurich Polytechnic where he attained his degree. It was at Zurich that he developed a passion for physics. He did his research on electrolytic capacitors for his Ph.D. studies. He presented his thesis on the same in 1882 and received his Ph.D.  Subsequently; he joined the mandatory military service where he served as an officer at the Swiss Artillery. He was released from his duties after a year.

Charles Édouard Guillaume officially began his career in 1902 at the Bureau as an associate director. He rose through the ranks and became its director in 1915. He served as the director till 1936 when he stepped down. He then became the Bureau’s honorary director a position he held on till his death.

During his time at the Bureau, Charles Édouard Guillaume conducted many types of research. His premier research was on thermometry. He also greatly contributed to the earlier work on the International Metre. Henceforth from 1890, he concentrated on his study on alloys.

In 1896, he made a great discovery on Invar (derived from Invariable) from his research. This was a nickel-iron alloy whose thermal expansion was of the low coefficient. He helped develop Elinvar in the 1890s, which was a variation of invar. Many industries greatly appreciated this new development. It had an advantage over any other alloy for it was resistant to corrosion.

Apart from conducting researches and leading many scientific developments, Charles Édouard Guillaume also authored books in his career.  To name a few, he authored Studies on Thermometry (1886) and Treatise on Thermometry (1889). He also wrote Units and Standards which was published in 1894 and X–Rays in 1896. In 1898 another of his books was released with the title Investigations on Nickel and its Alloys.

The Swedish Academy of Sciences was awarded to Charles Édouard Guillaume during his career. At the time, no other scientist had ever received this award. It was a great honor for Charles to be the first. He was also presented with the John Scott Medal in 1914. In 1920, he won the Nobel Prize in Physics.

Charles Édouard Guillaume tied the knot with A. M. Taufflieb in 1888. The couple was blessed with three children.

Charles Édouard Guillaume died on May 13th, 1938. His death occurred when he was aged 77 at Sèvres in France.