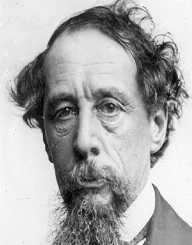 Charles Dickens, a profound author of several novels and literature, was born on February 7, 1812, in England. His writing skills had a major impact on its readers in the mid-1800s until his death. His major works include ‘A Christmas Carol,’ ‘A Tale of Two Cities’ among many other classic novels. By the time Dickens was working on his final book, he had died of a stroke in 1870.

World’s famous writer Charles John Huffam Dickens was born a British citizen in 1812, on February 7. He was born in Portsmouth which lies south of England in a family of eight children with him as the second born. His father John Dickens worked as a clerk and his mother Elizabeth Barrow was never successful in her attempts at becoming a teacher. Poverty and humble abode characterized Charles' background. In 1816, the family relocated to Chatham, Kent where Charles and his siblings lived until he was 11years.

Dickens was a child who loved reading even though he did not attain much of an education in his early years. The family struggled in debts and by the time they moved from Kent to Camden Town in 1822 their situation was in such depravity. Dickens’ father was arrested and imprisoned in 1824 due to the accumulated debts that he could not afford to pay. Dickens had to leave school at age 12 and sought for employment at a boot-blacking factory. The wage here was somewhat meagre, but it was the only means by which he could support the family.

A ray of hope lightened the family when Charles Dickens was admitted to school again, and his father paid his debt from his family inheritance. This moment, however, did not last because Dickens left school at age 15 in 1827 due to lack of support. He began working as an office messenger to earn an income for his family. This discourse became a turning point for Dickens and the beginning of his writing career which saw him work for London newspapers and law courts in London.

Charles Dickens began his first writing in 1833 when he could do sketches for newspapers and magazines popularly known as ‘Boz.’ By 1836, these minor works were put into a publication which was named ‘Sketches by Boz’ making it his first book. After this first publication, Charles began publishing The Posthumous Papers of the Pickwick Club doing it in sketches and illustrations which came in bits. The fact that he was also a publisher of the Bentley’s Miscellany magazine inspired him to do his first novel known as ‘Oliver Twist.’ In this book, he expressed how it feels to live in less fortunate families and poverty. The following years between 1838 and 1841 Charles had been working on the novels ‘The Life,’ ‘The Old Curiosity Shop,’ ‘Barnaby Rudge’ and Adventures of Nicholas Nickleby.’

Dickens made his first tour in 1842 to the U.S where he visited Virginia, Missouri and other states lecturing about liberty. His second tour dated between 1867 to 1868 after adverse criticism and opposition met his first tour. He made an amount grossing to U.S$ 95,000 in only 76 presentations. He was celebrated in London and loved for his liberal thinking which made him famous.

Charles Dickens married Catherine Hogarth and together had ten children before they divorced in 1858. Charles lost his father and daughter around the 1850s and also had domestic issues with his second wife Kate which led to their separation. He also had an affair with an actress known as Ellen Nelly Ternan which he dismissed later in his writings.

Dickens was a traveler, and unfortunately, in 1865 he was involved in a train accident but never recuperated fully. Despite his condition, he never stopped his tours, and on 9 June 1870 Dickens died of a stroke in Kent, England. His death attracted many mourners and was buried in Poet’s Corner at the Westminster Abbey. Dickens, however, died leaving an unfinished work on the novel ‘The Mystery of Edwin Drood’ at the age of 58.