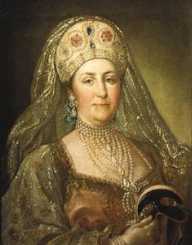 Catherine II also famously referred to as Catherine the Great is one of the amazing women of her time. She was born Prussia in 1729. She later got married into the ruling Russian family by 1745. Following the death of the Empress, she and her husband, both rose to power as the Empress and Emperor of Russia.

She is one of the pioneers that introduced a structured education system that favored both sexes. During her reign, she saw to the expansion of the Russian borders than ever before. She also ruled Russia longer than any other female ruler to date.

Catherine II was born in 1729 in Stettin, Pomerania, a Kingdom of Prussia now commonly known as Poland. Her father was Christian August of the Anhalt ruling family in Germany. She was educated mainly by a French governess but had the chance to be taught by other tutors as well.

Despite being born a princess, her family was not wealthy at all. Due to the push by her wealthy family members, she rose in both status and power.

Catherine II met her future husband when she was only ten years of age. Catherine disliked Peter right away due to his pale complexion and fondness of liquor. She also hated the fact that at that time Peter was still playing with toys. Catherine became ill on her arrival to Russia leading to her going through the phlebotomies.

Catherine the Great moved to Russia where she married Peter III. Peter’s aunt Elizabeth of Russia died on the 25th of December 1761 leaving a vacuum on the throne. The couple had a strained relationship. Catherine took advantage of this. She organized a coup forcing Peter to step down from the throne. The 9th of July saw her coronation as the sole Empress of Russia.

There was nobody to oppose the exchange of power. This was because Peter had no working relationship with the Nobles, officials and even the military. His support for the Prussia was one of the many reasons that sparked anger in the Orthodox Church. He also oppressed them by seeing their lands confiscated. Peter was overthrown through the conspiracy of his wife and her lover Gregory Orlov, a military officer (lieutenant) and other officials.

Catherine II was a firm believer in the education system. She had the aim of broadening the culture, mind, and morals of young people. She wanted to eradicate illiteracy in Russia by providing a good intermixed education on different cultures. As a result, she appointed Ivan Betskoy as her advisor on matters to deal with education.

In the year 1764, Catherine requested Rev. Daniel Dumaresq to Russia for consultations on the matter of education. She then posted him to the educational commission to study the project that was initially in place. The commission came up with a solution to a generalized education system. They wanted to teach the Russian children but exclude the serfs. The legislative committee rejected the proposal.

Dumaresq then consulted with Dr. John Brown in 1765 on how to proceed with the matter. He got a well-written reply on the subject. Brown suggested that the education system ought to be provided under the government and for all sexes. Catherine accepted the proposal and ordered Ivan Betskoy to come up with a system that lived up to the same.

The system was first tried at the Moscow Founding  Home. It did not do well as it was not a government-sponsored institution. Most of the children died early or did not live to see the benefits of the education given. Sometime later Catherine herself saw to the opening of The Smolny Institute for Nobles girls. She had the aim of providing a better education system for girls. The ladies learned different skills like music, language, dancing and the monarch system. Discipline was of priority, and the institute saw to its full application.

Catherine II married the Grand Duke Peter II on 21st August 1745. Peter chose to play his toy and sometimes indulged in his mistresses. She, on the other hand, had many lovers during her tenure on the throne. This made them have different personal interests.

Catherine would reward them with gifts and high positions so long as they served her interests. She bore an illegitimate child with Grigori Orlov but created for him a job away from her court. She also gave birth to an illegitimate daughter by the name of Anna Petrona in December 1757 by Poniatowski.

Upon the death of Scotland’s ruler, King Augustus III in 1763, Catherine II ordered Russian troops into Poland. They were there to impose Poniatowski as King and to crush any rebellion. There were many rumors at the time that Catherine would marry her lover Poniatowski making her the ruler of Poland. To avoid such strife that would see Europe rise against Russia, she told Poniatowski to marry, but he refused.

Catherine the Great died on 17th November 1796 after suffering what seemed to be a stroke at that time. She was laid to rest next to her husband Peter II at the St. Peter and St. Paul. While her body was still at the Winter Palace, their son made sure to honor his father by placing his body next to hers.