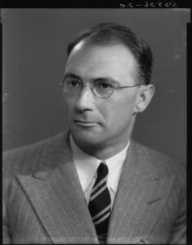 English novelist C.S. Forester was born Cecil Louis Troughton Smith in Cairo, Egypt on the 27 August 1899 to George Foster Smith and Sarah Medhurst Troughton. He was the youngest of their five children. Forester Snr. was an English school teacher who had opened a school in Egypt to give upper-class Egyptian boys an English education. When Forester was three, his parents separated, and his mother returned to England with her children. Forester Snr. remained in Egypt, seeing his children for one month a year in England.

C.S. Forester was a pupil at Alleyn’s School and Dulwich College, in South London before studying medicine at Guy’s Medical School in London. He did not apply himself to his medical studies and left without graduating.

During World War II (1914-1918) C.S. Forester was considered medically unfit for active duty. In the early 1920s, he began writing fiction, and his first novel was A Pawn Among Kings. Success came with the publication of Payment Deferred which was about a man hanged for a murder that he did not commit.

C.S. Forester was a prolific writer who went on to write numerous novels including The African Queen which was adapted for film and is today considered a film classic; Brown on Resolution, Death to the French, The Gun and The General. He went to Hollywood in the mid-1930s to work on a pirate film, but the project was abandoned when another studio released Captain Blood starring Errol Flynn.

When World War II (1939-1945) was on, C.S. Forester worked for the British government in Washington D.C. on propaganda material. During this time (1942) he met Roald Dahl who was working as a British Intelligence Officer and after hearing of Dahl’s experiences in the Royal Air Force suggested that he wrote them down and encouraged him to become a writer. Forester relocated to Berkeley, California and lived there for the rest of his working life.

C.S. Forester became partially crippled in the early 1940s when he developed arteriosclerosis in his legs.

C.S. Forester's first wife was Kathleen Belcher whom he married in 1926. They had two sons, John, and George Forest before divorcing in 1945. He then married Dorothy Foster in 1947. Forester died of a stroke on the 2 April 1966 in Fullerton, California.