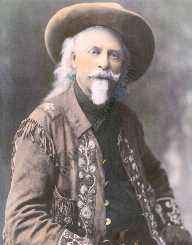 ‘Buffalo’ Bill Cody earned is a nickname for killing over 4000 buffalos. He was an international celebrity of the 18th-19th Century for his show ‘Buffalo Wild West’ which he performed across Germany, Great Britain, and Europe. Notably, he served as a Pony Express rider and as an Army Scout which earned him a ‘Medal of Honor.’

Bill Cody was born to Isaac Cody and Mary Ann Bonsell Laycock on February 26, 1846, in Le Claire, Lowa. Atone-year-old, his parents moved to Ontario where they settled for several years.

He was baptized as William Cody in 1847 at Dixie Union Chapel located in Peel County.
In 1853, his father, Isaac Cody, sold their property in Scott County and they relocated to Kansa Territory In this place, residents were pro-slavery supporters.

Since his father was an anti-slavery advocate, one of the opponents stabbed him while giving a speech against slavery. Although he had the wound treated, he never recovered from the injuries.

The continued rivalry between the proslavery and antislavery supporters led to their family’s persecution and his father spending time away because his enemies plotted to kill him. Unfortunately, his father died in April 1857 from a kidney disease and a respiratory infection caused by the effects of his stabbing.

His death prompted the family financial problems forcing Bill to take a job at the age of 11. This job entailed him riding on a horse to deliver messages to drivers and workers.

Later on, he enrolled in Johnston’s Army where he guided United States Army to Utah as an unofficial member of the scouts and helped to put an end to the rebellion of the Mormon population.

At the age of 14, Bill made a trip to Fort Colville and California to look for gold, but on his way to the gold fields, he met an agent for Pony Express who gave him a job as a rider in 1860.

While working as a Pony Express rider, he received news that his mother was sick. Therefore, he returned home. After his mother’s recovery, he wanted to enroll as a soldier, but he was denied the chance due to his young age.

However, Bill started working as a freight caravan where he delivered mail to Fort Laramie. At the age of 17, he worked as a private teamster in Company H until 1865.
In 1868, he enrolled back to the army during Plains Wars and worked as the Chief of Scouts for the Third Cavalry. During this time, he scouted for the Indians, fighting 16 battles and supplied the Army and the Pacific Railroad with bison.

At the age of 23, Bill met Ned Buntline who published his adventures in a novel, ‘Buffalo Bill, King of the Bordermen’ which sold successfully. Later, it serialized on the front page of Chicago Tribune on December 15, 1869.

Additionally, he held a touring show titled ‘Buffalo Bill’s Wild West,’ and he traveled to United States, Great Britain, and Europe.Bill was also a scout during the expedition of Grand Duke Alexei Alexandrovich of Russia in January 1872. During this time, he earned a Medal of Honor as an Army Scout in the Indian Wars. This award was the highest military decoration given to officers who demonstrated bravery beyond the call of duty.

On December 1872, Bill made a stage performance alongside Texas Jack Omohundro in ‘The Scouts of the Prairie’ film in Chicago. In 1873, he performed a play ‘Scouts of the Plains’ followed by ‘Buffalo Bill Combination’ in 1874. He also scouted on the prairies and toured with the troupe for ten years.

Later in 1883, Bill founded a circus-like attraction called, ‘Buffalo Bill’s Wild West’ that toured the United States and Europe annually. He also organized a Buffalo Bill’s Cowboy Band directed by William Sweeney, who wrote most of the music performed by the band.

In 1887, he played his show in Great Brittan during the celebration of Jubilee year, and Queen Victoria attended the performance. The Queen was impressed by this performance and commanded another show on June 20, 1887.This show also played in London, followed by Birmingham and Salford.

Later in May 1889, the ‘Buffalo Bill’s Wild West’ show performed at the event that commemorated the Storming of the Bastille in Paris entitled ‘Exposition Universelle.’

In 1890, Bill met some Italian Butter and included them in his performances led by Augusto Imperiali.

By and large, in 1893, Bill changed the name of the band to ‘Buffalo Bill’s Wild West and Congress of Rough Riders of the World’ where they paraded on horseback including performers from all over the world displaying their distinctive horses and colorful costumes. This show influenced many construals in cinema and literature during the 20th Century.

In the same year, he set up an exhibition near ‘The Chicago’s World Fair’ that contributed to his fame in the United States.
In 1913, the government changed the hierarchy of military awards and restricted its recipients. This law meant that the civilian’s scout’s prizes to be withdrawn, and Bill’s medal was stripped shortly after his death. However, his relatives objected and his badge was restored.

In 1866, Bill married Louisa Frederici, and the couple had four children. Unfortunately, two died young followed by their third child while living in Rochester in New York. All their three children graves are in Mount Hope Cemetery in Rochester.

In 1904, Bill filed for divorce after 38 years of marriage. Several trials followed, and in 1905, the judge ruled that there were no grounds for their divorce. This decision followed the couple’s reconciliation in 1910.

Bill earned his nickname ‘Buffalo Bill’ while he supplied the Kansas Pacific Railroad with bison meat. He killed approximately 4,282 Buffalo from 1867-1868.Later on, he competed with William Comstock over the right to use the name ‘Buffalo Bill’ where he won the completion by killing 68 animals against Comstock’s 48.

Notably, the profit he collected from his show performances in 1893 enabled him to purchase a ranch in Nebraska including an 18 room mansion and a barn store of the show’s livestock.

Bill Cody died a day after his baptism by Father Christopher Walsh, on January 10, 1917. After receiving a full mosaic funeral; his sister selected his burial site on June 3, 1917, in Golden, Colorado.