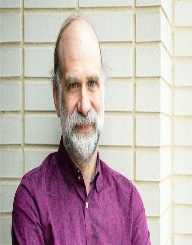 Bruce Schneier is a security technologist and a writer on general security. He also worked as a cryptographer and security professional in computer and privacy.

Bruce Schneier was born on 15th of January 1964, in New York City, America. His parents were Martin and Rebecca Schneier, and he was the only child. He was raised in Flatbush, going to the local Public School 139 in Brooklyn, and later Hunter High School.

Counterpane sold managed computer network security services and was bought over by BT Group in 2006. He published Cryptography Engineering in 2010, with more focus on using the skill in real life, instead of its internal design.

Aside from writing books, Bruce participates in the creation of many cryptographic algorithms.

Bruce Schneier is currently the Chief Technology Officer of IBM Resilient. He is also a fellow at Harvard University’s Berkman Center for Internet and Society, and fellow at the Belfer Center at Harvard's Kennedy School of Government, where he is an adjunct lecturer on cyber- policy and cybersecurity.

Bruce is also a board member of Electronic Frontier Foundation, a digital- rights group that tries to stop Government Overreach.

Bruce Schneier still writes researches and articles for those who are into cryptography and engineering of it. For the usual audience, he has essays about cybersecurity. Bruce has interviews on the news about Internet security and other topics. In total, he has published fourteen books.

In 2000 Bruce Schneier wrote Secrets and Lies, targeting general audience about computer security. He followed up with Beyond Fear: Thinking Sensibly About Security in an Uncertain World in 2003. A year later, he started his blog Schneier on Security, and newsletter named Crypto-Gram. Bruce writes about computer security issues.

Bruce then published Liars and Outliers: Enabling the Trust that Society Needs to Thrive in 2012, talking about trust in the new society behind the computer screen. In his book.

Bruce Schneier emphasizes the importance of security in exchange for trustworthiness and compliance. His most recent publication is Data and Goliath: The Hidden Battles to Collect Your Data and Control Your World, talks about mass surveillance and its effect on societies.

Owing to his fame and knowledge in computer security, Bruce Schneier is a frequent guest on television and news about security issues. He talks about flaws in security and cryptographic implementations. He also testifies in Congress about the role of connected devices in cyber attacks.

Bruce Schneier won Electronic Frontier Foundation award in 2007; the award is given to individuals who contribute significantly to the empowerment of individuals in using computers. He has an honorary doctoral degree from the Department of Electronics and Computer Science, of the University of Westminster England in November 2011.