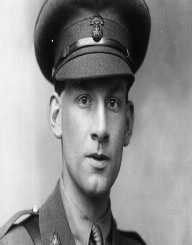 Bruce Kingsbury was born on January 8th, 1918 to UK immigrants. His place of birth was in Melbourne in Australia. He was the second son of Florence Annie and Philip Kingsbury. His father earned a living as an estate agent. When Kingsbury was five years old, he met his best friend to be Allen Avery. He later assisted his father in running his business in real estates. However, he disliked this job.

Bruce Kingsbury attended Windsor State School for his early education. He was an average student in his academic performance. He later received a scholarship which gained him admission at Melbourne Technical College.

Bruce Kingsbury began his career as a farm caretaker though he was a qualified printer. Three months later, he went on an adventure with his friend Avery. They toured New South Wales and Western Victoria. At the age of 18, Bruce Kingsbury quite his job and so did Avery. They then did odd jobs as they traveled north. They began with Piangil then Leeton and later Wagga Wagga. They finally reached Sydney and returned to Melbourne by train. Kingsbury rejoined the business of his father till 1940. In the same year, he joined Australian Imperial Force against the wishes of his parents.

Bruce Kingsbury served among the 2/2nd Pioneer Battalion at first. He later shifted to the 2/14th Infantry Battalion where Avery was. He participated in his first campaign beginning June 1941 in an invasion of Lebanon and Syria. It went on for five weeks. He later participated in other campaigns as well.

In August 1942, the2/14th Infantry Battalion arrived at the town of Isurava to assist in the battle against the Japanese. Kingsbury was among the volunteers in a counter-attack against the Japanese even after they had lost heavily in the battle. It was a brave move that was greatly applauded by the citizens of Australia. Sadly, the Japanese shot him with a sniper and killed him. However, he died a hero for he never gave up in the Battle of Isurava.

Bruce Kingsbury fell in love with Leila Bradbury while he was in Sydney. They got engaged but never got married after Kingsbury was stationed overseas.

Bruce Kingsbury took his last breath on August 29th, 1942 after he was shot in the Battle of Isurava. He died in Isurava in Papua New Guinea at the age of 24. He was laid to rest in the Bomana war cemetery situated in Port Moresby. “Kingsbury,” a suburb situated in Melbourne exists in the memory of the great soldier.