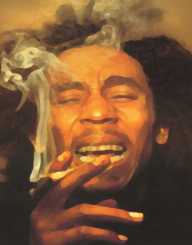 Bob Marley was born on February 6th, 1945. He was a Jamaican musician, songwriter, and guitarist. He served as the world’s ambassador for reggae music. He was in a band known as ‘The Wailers’ when he started singing. Throughout his career, Bob sold more than 20 million records. He died on May 11, 1981, in Miami, Florida.

Robert Nesta ‘Bob’ Marley was born on February 6th, 1945 in St. Ann Parish, Jamaica. He was born to Norval Sinclair who was a supervisor at a plantation and Cedella Booker who was a singer-songwriter. Bob went to the same school with Neville Livingston, that is, Stepney Primary and Junior High School. Bob and Neville started writing music while still in school. Neville influenced Bob to start playing the guitar. Bob and his friends, Neville, Beverly, Junior and Peter Tosh, formed ‘The Wailers’ Band.

Bob Marley’s career in music started on the formation of ‘The Wailers’ band. With the help of Leslie Kong, Bob recorded his first single in 1962. The single was not a success, and so Bob decided that going solo was not his thing. Bob and his friends formed the band ‘The Wailers’. In 1964, the band’s single ‘Simmer Down’ went to the top of the Jamaican Charts. With their first single, the band became popular in Jamaica.

In 1960, Beverly and Braithwaite left the band to pursue solo careers. With the help of Lee Perry ‘, The Wailers’ released their album ‘Soul Rebels’ in 1970. The album was produced by ‘Trojan Records’ in the UK. It became successful as it was an international album. In 1971, ‘The Wailers’ released two popular albums ‘Soul Revolution’ and ‘The Best of the Wailers.’ In 1972, Bob Marley collaborated with Jonny Nash for a tour of the UK with the London based ‘CBS Records.’

In 1972, Blackwell signed Bob for his record company as a substitute for reggae artist Jimmy Cliff. In 1973, ‘The Wailers’ released the album ‘Catch a Fire’ for the label ‘Island Records.’ They released another album ‘Burnin’ the same year. In 1974, ‘The Wailers’ disbanded but Bob continued to release solo albums and singles going by the name ‘Bob Marley and The Wailers’. In the same year, Bob released the solo album ‘Natty Dread.’ He produced the albums ‘Exodus’, ‘Kaya’ and ‘Babylon by Bus’ between 1977 and 1978.

In 2000, Bob Marley released the album ‘Survival’ which was successful. The album contained tracks like ‘Africa Unite,’ ‘Zimbabwe’ and ‘Wake up and Live.’ His album ‘Uprising’ contained famous singles like ‘Redemption Song’ and ‘Forever Loving Jah.’ He was privileged to perform at Boston’s ‘Amandla Festival’ and Pennsylvania’s ‘Stanley Theater.’

During the 1970s and 1980s, Bob Marley was presented with the United Nation’s Award ‘Peace Medal of the 3rd World’ and the ‘Jamaican Order of Merit’ by the Jamaican government. Bob received the ‘Grammy Lifetime Achievement Award.’ He was inducted into the ‘Hollywood Walk of Fame’ and the ‘Rock and Roll Hall of Fame.’ ‘The Wailers’ album ‘Catch a Fire’ has been included in the ‘Grammy Hall of Fame.’

In 1966, Bob Marley joined the Rastafarian movement. He inculcated the movement’s culture into his music. He was a notorious marijuana smoker. He married Alpharita Constantia Anderson in 1966. They had three children together. In 1977, Bob was diagnosed with malignant melanoma, that is, cancer of the skin. On May 11, 1981, he succumbed to his illness at ‘Cedars of Lebanon Hospital’ in Miami, Florida.  Bob made a name for himself in reggae music. He continues to be the ambassador of reggae music. He is an idol to many reggae musicians.