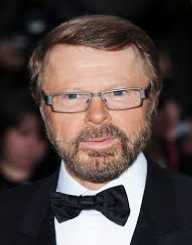 Bjorn Kristian Ulvaeus was born on April 25, 1945, in Gothenburg, Sweden. He was born to Alva Ulvaeus and Erik Gunnar Ulvaeus. He was brought up in Vastervik.  He did his military service alongside Magnus Holmstrom. He later graduated with bachelors in law and business from the Lund University.

Bjorn Ulvaeus was a member of the Hootenanny Singers which was a Swedish folk-schlager band. In 1966, he met with Benny Anderson, a Hep Stars group keyboard player.

While touring with the Hootenanny Singers, Bjorn Ulvaeus also worked as Polar Record Company’s in-house producer alongside Benny. Their first production was ‘A Flower in My Garden’ which was sung by Arne Lambert as a Swedish version.

In 1970, their newly recorded single as a duo ‘She’s My Kind of Girl’ was released. Their song as the Hootenanny Singers ‘Omkring Tiggarn Fran Luossa’ which Bjorn was a vocal soloist had its hit in Swedish radio charts.

Bjorn Ulvaeus later joined the ABBA musical group where he produced many songs. He after that alongside Benny Anderson created ‘Chess,’ ‘Kristina Fran Duvemala’ and ‘Mamma Mia’ musicals. He was the co-producer of the ‘Mamma Mia’ film alongside Benny. In 2004, he appeared in ‘Our Last Video’ which was a comedy video. In 2013, he alongside Benny, Avicii composed ‘2013 Eurovision Song Contest’ anthem.

Their original casts for the musicals were nominated for the Grammy Awards. He alongside Benny also received the Ivor Novella Award which is an exclusive international award from the British Academy of Songwriters, Composers, and Authors.

In 2008, they were awarded the Music Export Prize by the Swedish Ministry of Industry and Trade. The Swedish Music Publishers Association also honored them with the Lifetime Achievement Award.