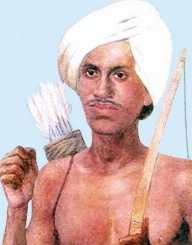 Birsa Munda born on November 15, 1875, was not just an Indian religious leader but also a freedom fighter who fought against British colonialism. Birsa who was from the Munda tribe. Though he lived a very short life, his influence in liberating his community and tribesmen from the British exploitation and atrocities was enormous.

During the British Raj in India in the 19th century, Birsa Munda raised a led a group of indigenous tribal and religious millenarian movement to revolt against the British’s exploitation of the countries resources, wealth, injustice and the torture meted against the people. His quest for freedom and self-rule for his community was his priority and therefore risked his life to ensure his vision came to reality. This made him a key player in the history of Indian independence movement.

Birsa Munda also served as a religious leader as he claimed to be a prophet from God and preached the one concept. Birsa’s contribution to his country today made him the only tribal leader to have his portrait hung in the Indian parliament. He has also been named after several monuments of that country.

Birsa Munda was born in Ulihatu in colonial Bihar, Khunti, Jharkhand on November 15, 1975, to SuganaMunda and Karmi Hatu into a Munda family. His parents were farm laborers. He was one of his parent's many children and Komta, Daskir and Champa were his eldest siblings and younger brotherPasna Munda. The family predominantly moved from one place to other in the search for laborer jobs in farms. However, Birsa Munda lived most of his formative year in Chalkadwhichconfuses people to presume that was his birthplace. Growing up, he took an interest in playing musical instruments especially the flute and the tuila, which was a one-string instrument, made from the pumpkins. As mere farm laborers, the family lived in abject poverty. Therefore, the children lived with other family members.

Birsa Munda lived two years in Ayibhata, his maternal uncle’s village. He had his early education at a school in Salga run by Jaipal Nag. Having an excellent academic record, he was persuaded by Jaipal Nag to enroll in a German Mission, but that meant he had to convert to Christianity. Basir did exactly that, and his name was changed to Birsa David but would later leave the school after few years of studies.

Birsa Munda and his family lived in Chaibasa between 1886 to 1990, which became under the rule of the Sardar’s, an anti-missionary and anti-government movement. This became the basis of Basirredrew from the German School in support of the Sandars. The entire family and joined the Sandar’s movement and therefore gave up on their membership of the German Mission. Under the leadership of Gidiun of Piring, the Mundas were restricted of their traditional rights of the protected forest in Porhat area, hence Birsa’s involvement in the agitation against the government’s decision. The British government then initiated its plan to convert the tribal agrarian system into a feudal state. With this initiative, other non-tribal people invited to cultivate the land since the indigence crude method was less productive. This led to the loss of land by the tribal and agrarian breakdown and culture change hence the start of agitations to reclaim their land.

Basir who has started a campaign against the British rule led Mundas to revolt against the government. They wanted to emancipate themselves from the British rule, eliminate all sort of middlemen in the agrarian chain and also gain control of their lands. However, he was captured in February with some of his armies and jailed upon a tip-off. He died four months later of what the British claimed to be cholera. Though he died very young, his legacy still lived. The revolt against the British led to the enactment of laws which ensured outsiders did not easily acquire lands of the tribal. It also led to the rekindle of the minds of the people to fight for their right and stand against injustice and the fight for freedom. His legacy became the basis for several other freedom fighters.

Birsa Munda betrothed an unknown woman who he had expressed interest in and presented jewels to the family while he was in Sankara, in Singhbhum, but upon his return from jail, he found out of her infidelity and left her. The daughter of Mathura Muda of Koensar and the wife of Jaga Munda proposed becoming his wives, but he refused to marry them. He later lived with a Sali of Burudih. Basir was arrested alongside his guerrilla army in the Jamkopai forest in Chakradharpur on March 3, 1900, by British troops. He died on June 9, 1900, aged 25 in Ranchi Jail where he was kept.

Birsa Munda has been named after several structures, institutions, and bodies in India. The Birsa Munda Airport, Birsa Munda Vanvasi Chattravas, Kanpur, Birsa Institute of Technology, Sidho Kanho Birsa University and the Birsa Agricultural University were all named in his honor. His life has been portrayed in Hindi films like Gandhi Se Pehle Gandhi, 2008 and Ulgulan-Ek Kranti in 2004.