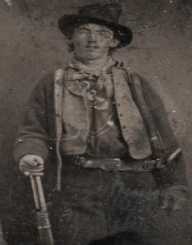 Henry McCarty or William H. Bonney best known as Billy, the Kid, was an American Old West gunfighter born on September 17, 1859. He is known for his participation in the New Mexico’s Lincoln Country War and his thievery records. Billy, the Kid, became a federal fugitive and an outlaw for escaping jail when Billy the Kid was first arrested for stealing food in 1875 and later for stealing clothing and firearms. After his escape from New Mexico’s prison, he flew to Arizona Territory. However, Billy the Kid once again became wanted after killing a blacksmith in Arizona during some confrontations in 1877. He had to return to New Mexico where he joined some cattle thieves.

Billy the Kid later joined the Regulators and fought in the Lincoln Country War. A year on he was involved in the killing of three men, including Sherriff William J. Brady in 1878. This led to his later arrest by Sheriff Pat Garrett in December 1880 and subsequent conviction of murder and sentenced to death. Nonetheless, the notorious McCarthy once again escaped from jail killing two sheriff deputies on April 28, 1881. However, his cup got full on July 14, 1881, and was shot by Pat Garrett in Fort Summer. Many people then, since claimed to be Billy the Kid occasionally.

Billy the Kid was born September 17, 1859, in New York City to Catharine and Patrick McCarthy. The family left for Indianapolis after the death of Patrick, and that was where Catharine met her second husband, William Henry Harrison Antrim. Antrim moved with the family to Wichita, Kansas in 1970. They again moved to Santa Fe, New Mexico where Antrim married Catharine on March 1, 1873. Catharine died on September 16, 1874, from tuberculosis shortly after they moved to Silver City, New Mexico.

Billy the Kid involvement in crime started after her mother’s death. He was 15 years at the time, and to employs his boardinghouse owner, Sarah Brown gave him accommodation. He was involved in several thievery activities first by stealing food on September 16, 1875, and later robbing a Chinese laundry of clothes and two pistols. He was arrested, charged with theft and jailed but escaped in prison cells two days later to become a fugitive. Billy the Kid later located and stayed with his stepfather Antrim but as his bad habits still persist he stole from Antrim, and he was thrown out of the house.

Billy the Kid then set for Arizona Territory to work as a ranch hand. His services were later hired by a rancher, Henry Hooker in 1876 but all this while used his wages to gamble. Billy the Kid later formed gang with John R. Mackie who was a Scottish criminal. Both started stealing houses. Billy, the Kid, would later get into trouble on August 17, 1877, after an argument ensued between him and a blacksmith, Cahill. The two fought and Billy fatally shot Cahill. After being on the run for some few days Billy the Kid returned but was met with his arrest and detained at the Camp Grant guardhouse but escaped and headed to New Mexico Territory.

The Lincoln County war started after the death ofMcCarthy’s employee John Tunstall was shot dead by a gang. After escaping from prison, prison, Billy the Kid was employed by Tunstall as a cowboy in Lincoln County. McCarthy later joined Lincoln County Regulators to avenge his boss death and truth to his words was involved in the capturing some of the culprits including Sheriff Brady, Frank Baker and William Morton who shot Tunstall but the latter two were killed when they tried to escape. Sheriff Brady and a deputy sheriff George W. Hindman were also later killed during a shootout between the Regulators and a buffalo hunter Buckshot Roberts. This led to a warrant been served for the arrest of all McCarthy and other involved.

After The Lincoln War

McCarthy and others were later arrested and charged for the death of Morris Bernstein a bookkeeper at the Mescalero Indian AgencyonAugust 5, 1878. According to other accounts, Bernstein was rather killed by Constable Atanacio Martinez. McCarthy and his group were indicted, but later the rest were left off the hook excluding McCarthy but just as always, Billy the Kid escaped from jail on June 17, 1979. In 1880, Billy the Kid killed Joe Grant in New Mexico he also engaged himself in other activities that the new posted SheriffPat Garrett who pursued him and later got him arrested on December 13, 1880.

Billy the Kid was convicted of the murder of Sheriff Brady and sentenced to death and was held at the guard on top of the courthouse. On April 28, 1881, Billy the Kid the Kid as his trademark was planned to escape so requested to be taken to the outhouse. Billy the Kid later traps and killed deputy sheriffs James Bell and also shot Bob Olinger, set himself free and took to his heels.

After his escape, a $500 bounty was placed on his head by Governor Lew Wallace and once again Sherriff Garrett rise to the occasion. After three months of his escaped Garrett had a tip-off that he McCarthy has taken refuge at a friend’s house in Fort Summer. Garrett and two other deputies set off to the place on July 14, 1881, where Billy the Kid questioned some of the residents including McCarthy’s friend Pete Maxwell. The conversation took deep into the night inside Maxwell bedroom, and there was McCarthy who entered the room unexpectedly.

Garrett was, however, able to notice McCarthy’s voice and shoot to the direction twice killing him. The bullet is said to have stuck in McCarthy’s chest above his heart. His body was later examined and confirmed, and he was buried the next day. Garrett was however denied the reward of the $500 bounty as the then acting Governor William G. Ritch refused to pay. However, over $7,000 was raised by some citizens of Las Vegas, Mesilla, Santa Fe, and White Oaks among other to reward Garrett.

There have been several speculations and school of taught that Billy the Kid (McCarthy) did not die in that rampage but believes the incident was staged in order to get McCarthy off the hook of the law.  This resulted in some people claiming to be Billy the Kid occasionally. All such claims were dismissed.