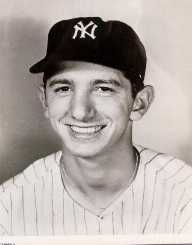 Billy Martin born Alfred Manuel Martin Jr. was an American Major League Baseball player who later became a manager. Born on May 16, 1928, he was a five-time manager of the New York Yankees and headed many other teams. Martin started his baseball career playing in the minor league, basting and throwing right-handed.

In 1950, Billy Martin joined the American League New York Yankees, playing mainly at second base. Martin was a mediocre player but known for his aggressive play. In 1957, he moved to Kansas City Athletics and would play for five other teams later, the last being Minnesota Twins. After his playing career in 1961, Minnesota Twins offered him a job as a scout, and he became a coach in 1965.

His first team was Denver Bear of the minor league and moved to Twins in 1969. Martin managed several other teams including Yankees on five different occasions. As a coach, he was very controversial finding himself in one trouble or the other including alcoholism, and insubordination, which led to him being fired from teams he managed. He was mostly fired after achieving success with the teams.

Billy Martin was born Alfred Manuel Martin Jr. on May 16, 1928, in Berkeley, California. He was born to a truck driver, Alfred Manuel Martin (known as AI Martin) and JuvanSalvini (Jenny). His parents separated soon after his birth, and young Martin never heard of his father again until in his 30s.

His mother remarried to John “Jack” Downey in 1929, who Martin referred to as a great guy. Martin was a troublesome child while in school always finding himself in one problem or the other with her teachers. His colleagues also usually mocked him for his small size with a protruding nose and coming from a poverty-stricken neighborhood.

This resulted in him always being in conflict and street fighting. Billy Martin gained interest in sports at a young age, competing in amateur boxing and baseball. He attended Berkeley High School from 1942 to 1942, admitted for his talent in sports. While there, he was able to raise his batting average from .210 at sophomore to .450 in his final year. Martin was an aggressive player and high tempered, resulting in his sacking from the school team.

Billy Martin was high tempered, and as such almost all the teams he joined added a clause in his contract, which sought to regulate his behavior on the field. After high school, Martin was in 1946 signed to Idaho Falls Russets, a Class D affiliate of the Oakland Oaks under a new manager, Casey Stengel. His performance was however not impressive hitting .254 with many throwing errors.

Billy Martin moved to Class C Phoenix Senators of the Arizona-Texas League. His performance improved hitting .393, as a third baseman, which was the highest average in organized baseball in 1947. He was named the most valuable player. He later moved to second baseman and with the impressive performance, was recalled to Oaks. Martin became very close to Stengel and learned his managerial skills, which would help him in his later career as a manager.

In 1950, Billy Martin moved to the New York Yankees in the American League. He remained there until 1957, playing mainly as a second base. He made a league debut on April 18, 1950, playing as a pinch hitter against Boston Red Sox at Fenway Park. He initially warmed the bench but with time became a regular second baseman for the team. Despite not being an exceptional player, Martin was aggressive, especially during crucial games.

Billy Martin was traded from Yankees to Detroit Tigers after the 1957 season. He played for other teams including Cincinnati Reds, Milwaukee Braves ending his career at age 32 in 1961.

After his career, Billy Martin accepted an offer to become a scout for the American League Minnesota Twins serving from 1962 to 1964. In 1965, he was made a third base coach of the Twin and on October 11, 1968, made the manager on a one-year contract.

He was sacked after 1969 season for off the pitch conducts including insubordination despite performing very well as a manager. He served as manager for other teams like Detroit Tigers from 1971 to 1973, Texas Rangers from 1973 to 1975 before his long in and out a stint with the Yankees.

Billy Martin's first stint with the Yankees was from 1975 to 1978 when he resigned for allegedly on health grounds, but basically, he did that before he could be sacked. He would return to the Yankees on five different periods.

After his first stint with the Yankees, Oakland Athletics hired him in 1980, performing extraordinarily well by bringing the team from the last position to second place in 1980. He remained in the team until 1982.

Billy Martin married four times first to Lois Berndt, with whom he had a daughter Kelly Ann. They divorced in 1955. In 1961, he married Gretchen Winkler and had a son, Billy Joe, divorcing in 1979. His third marriage was to Heather Ervolino and lastly to Julian Guiver in 1988. Billy Martin died in a low-speed single-vehicle accident on December 25, 1989.