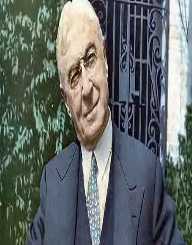 Bernard Mannes Baruch was born on August 19th, 1870 to a Jewish Family. His place of birth was Camden, in South Carolina. He was the second son of Simon Baruch and Belle Wolfe. His father was a physician. He had three brothers, Herman Benjamin, Sailing Wolfe and Hartwig Nathaniel.

Bernard Baruch along with his family moved to New York City, and that is where he attended a local school for his early education. He later joined City College of New York and graduated from there after completing his studies.

Bernard Baruch began his career in A.A. Housman & Company. He worked as a broker before becoming a partner in the company. He then ventured into business where he bought a position in New York Stock Exchange. His business turned out quite successful making him a very wealthy man before he reached his 30th birthday. He was a proud owner of his brokerage firm by the year 1903. By then he had neither intention nor interest of joining any financial houses. This earned him the name "The Lone Wolf of Wall Street." He became the best broker in Wall Street by 1910.

When Bernard Baruch left Wall Street, he became a member of the Council of National Defense in the US. His major role was to advice Woodrow Wilson who was the 28th president of the US at the time. He would advise him in terms of peace, economic matters as well as issues to do with National defense of the country. He was appointed chairman of a War Industries Board in 1918 and saw it through a successful economic growth during the First World War I.

Bernard Baruch remained as an advisor to the 32nd US president Franklin D. Roosevelt in the 1930s. During this time he helped establish National Recovery Administration-NRA. During the Second World War, the president appointed Bernard to be the director and adviser of Office of War.

Bernard Baruch proved to be a great advisor to the US presidents. He, therefore, continued this role during the rule of the 33rd president of US Harry S. Truman. In 1946 became US representative of United Nations Atomic Energy Commission –UNAEC having been appointed by the president himself. He later stepped down from the role in 1947.

Bernard Baruch was famously known for his routine of sitting in the park. The two spots he loved most were Central Park in New York and Lafayette Park in Washington DC. In 1960 a park was set up by the Boy Scouts in Lafayette right across the white house to commemorate Bernard during his ninetieth birthday.