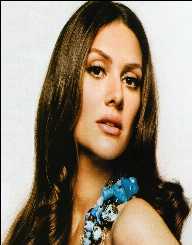 Turkish actress Berguzar Korel as born in Istanbul, Turkey on the 27 August 1982. Her parents Hulya Darcan and Tanju Korel are both actors.

Her first role was Leyla in Valley of the Wolves: Iraq and this was followed by a starring role in Binbir Gece. She had a guest role in Magnificent Country and also starred in the television series Karaday?.

Berguzar Korel has won many awards in Turkey including the Golden Butterfly Best Actress award in 2007 for Binbir Gece, the Lion Max Best Anchor award (2010) and the Radio Television Press Association's: Actress of the Year (2012). She won the Golden Awards Best Actress award again in 2012 for Karadayi.

Berguzar Korel married actor Halit Ergenc in 2009, and the couple has one child, a son born in 2010.