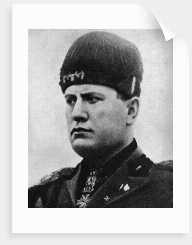 Benito Mussolini was born on July 29th, in 1883. His birthplace was in Dovia di Predappio in Italy. Right from the time he was young, Mussolini was an eager socialist. Like father like son, Mussolini was following the footsteps of his father by being acting in politics. However, he was soon expelled by the political party he was associated with for being a pro-World War I. later on, in 1919, he went ahead and launched his political party called Fascist Party. Sooner or later, he managed to rule Italy with his dictatorship manner of ruling. In 1945, Mussolini was killed.

Benito Amilcare Andrea Mussolini was born in 1883. His parents were Alessandro Mussolini and Rosa Maltoni. His father was a professional blacksmith while his mother was a Catholic school teacher. His father was also passionate about politics, and this is one of the reasons he named his son after Mexican Leftist President who was called Benito Juárez. Mussolini’s parents had three children with him being the eldest son.

While Mussolini was still growing up, part of his major influence towards politics came from his father. He taught him more about socialist politics and the aspect of defying authority. This had an impact on young Mussolini as he also became disobedient in school. He went to several schools as he was often expelled for bullying others and defying authorities in school. In 1901, Mussolini managed to earn himself a teaching certificate. This made him venture into his early work as a schoolmaster.

Shortly after entering the teaching career, Benito Mussolini emigrated to Switzerland. He made this move for reasons that he was not into the idea of serving in the military. Things were challenging in his new location as he did not find permanent jobs that suited him.

Soon, Mussolini became an active member of the Italian socialist movement that was in Switzerland. His magnetic influence captured the authorities’ attention, and he was arrested for advocating violent strikes. He was jailed for two weeks before his deportation back to his home country, Italy.

Shortly after being released, Mussolini continued with his socialist agenda in Italy and later went back to Switzerland. It did not take time before he was again arrested in the city of Geneva, Switzerland.

Benito Mussolini began to have a different perspective with regards to World War I. In the beginning; he was against the war. However, this changed as he thought this was an opportunity for his country to become powerful. Therefore, he began his full support for World War I. His changing mentality and attitude made his fellow socialists to expel him from their Italian socialist party.

In 1915, Mussolini was at the front line of the Italian army fighting in the world war. His efforts earned him quick recognition, and he was promoted to become corporeal. After sustaining injuries in the line of duty, Mussolini was discharged.

Mussolini continued with socialist movement and brought a wave that criticized the government’s weaknesses in areas such as the Treaty of Versailles. In fact, in 1919, he formed an opposition party, the Fascist Party. Part of his party’s missions was to oppose the social class discrimination that was prevalent in Italy.

Mussolini fought to gain political power by emphasizing on the failures of the government. He went to the extent of coming up with his military group called "Black Shirts." His military intimidated political opponents and therefore giving the Fascist Party a chance to grow by influencing the Italian people. Surprisingly, by 1922, Italy underwent political chaos. Mussolini used this as an advantage to campaign for his abilities to rescue the nation. Soon, he was given the power to rule Italy.

With time, Mussolini brought down all democratic institutions, and in 1925, he made himself a dictator. His title was “II Duce”- which meant “the leader.” On the bright side, his popularity with the people was on the rise as he used his power to reduce the extent of unemployment in the nation.

With Mussolini unjustly exploiting his powers, time was ticking for him. First, he raided Ethiopia, and it became an Italian empire. He continued to succeed in his military endeavors, and this pulled the interests of his fellow German dictator, Adolf Hitler. They formed strong relations together as they signed the “Pact of Steel,” which marked the beginning of a military alliance. With negative influences on the Jews from Hitler, Mussolini adopted this in Italy. In addition to this, the war came to them as Hitler proclaimed war against other nations such as British, Poland and France. This was however not a good thing as Italy’s weaknesses were quickly pointed out. Mussolini’s military was not happy with his way of ruling. This led to an attempted coup that failed in 1941.

Benito Mussolini was soon captured after resigning from office and was executed on April 28th in 1945.

Benito Mussolini had a affair with Rachele Guidi in 1910 and had one child in the process. Five years later, he tied the knot with her and had other four children. He also had a son with Ida Dalser after marrying her in 1914.