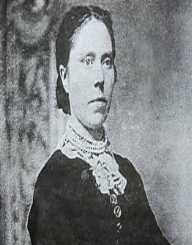 Belle Gunness was born on November 11, 1859. She was a Norwegian-American serial killer. She is renowned for her serial killing character and killing over 40 people between 1884-1908. She died at the age of Forty Eight years.

Belle Gunness was born Bella Paulsdatter/ Brynhild Paulsdatter Storset on November 11, 1859, in Selbu, Sor-Trondelag, Norway. She was born to a Stonemason. She was also known as Hell’s Belle, Lady Bluebeard, and the Black Widow. In 1881, she immigrated to America. She started her killings soon after her house burnt down. She later began inquiring for insurance money. She later poisoned her daughters for the insurance money. She later killed her other infant child with whom she bore with her second husband.

She after that killed her husband. She later murdered Jennie who was her adopted daughter. She later joined a lovelorn column where she found wealthy men who were her next victims. She had a hideout farmhouse in La Porte, Indiana. The wealthy men brought money to her farm but were not seen again. Some of her victims included Henry Gurholdt, Olaf Lindbloom, Andrew Hegelein, John Moo, and Olaf Svenherud among others.

In 1908, Belle Gunness burnt her farmhouse down soon after she recovered that Hegelein’s brother was looking for her. Afterwards three skeletons discovered in the burnt house were identified as her foster children. More than Fourteen bodies including children and men were exhumed in her farms surrounding. A skeleton with a missing head found in the burnt house was assumed to be hers.

In the same year, Gunness’s helping hand Ray Lamphere was arrested for arson and murder. He later revealed that Gunness did not die in the burnt house and that she faked her death and fled. He was later charged with arson. She was never tracked down nor arrested.