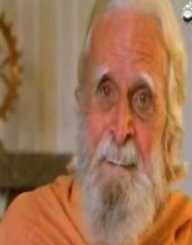 Bede Griffiths was born on December 17th, 1906 to a middle-class family. His place of birth was Walton-on-Thames, Surrey, England. He was the last born to a family of three. They were all raised in poverty forcing Griffiths to attain his education in poor schools. Their mother tried her best to earn a living through odd jobs. His father had lost his shares in a business that he shared with a friend. The family had to live in a smaller house to make ends meet. His mother later died in a car accident.

Bede Griffiths attended school at Christ's Hospital when he was 12 years old. This was a school for the poor. Students who attended this school were commonly referred to as "bluecoats." Luckily Griffiths was a bright student. He excelled in his studies and received a scholarship to the University of Oxford. In 1925 he joined Magdalen College where he studied philosophy and English literature.

He studied under C. S. Lewis from his third year. During this time, a great friendship developed between him and C. S. Lewis. Four years later, Griffiths was through with his studies in journalism and attained his degree. After his graduation, he earned a living doing odd jobs along with other alumni of Oxford University. The group milked cows and sold milk. This was when they began a routine of reading the bible.

After Bede Griffiths stayed in the Benedictine monastery of Prinknash Abbey from 1931, he fell in love with such a lifestyle. He decided to be a part of the Roman Catholic Church. During the Christmas Eve, he had his First Communion. This took place at the abbey. A month later he was official as a postulant.

Towards the fall of 1932, he was a member of the Novitiate. He was even given the name "Bede." In 1947, he was among 25 monks chosen to serve in monasteries situated in the UK. Monks who came from France had established these monasteries. Griffiths was appointed as obedientiary prior at Farnborough in Hampshire. Four years later he was shifted to the Pluscarden Abbey situated in Scotland.

Bede Griffiths decided to build a monastery in his homeland and Kengeri in Bangalore was the first place he thought of. However, his plans failed, and he decided to quit in 1958. He then established Kristiya Sanyasa Samaj, Kurisumala Ashram along with Father Francis Acharya. This was a monastery for Syriac Rites. He joined the Saccidananda Ashram which is located in Tamil Nadu in South India in 1968.

In the later life of Bede Griffiths, he had a stroke in 1990 but was well again after a month. He then toured many places including Europe, The United States, and Germany among others. In October 1992, he returned to Ashram. Upon his return, a documentary about him was released. The documentary was titled A Human Search.

Bede Griffiths took his last breath on May 13th, 1993 following a series of strokes. He died in Shantivanam in India. He was 83 years old at the time of his death.