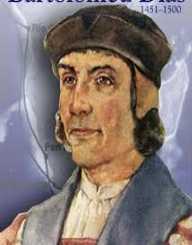 In 1450, Bartolomeu Dias was born in Algarve, in the Kingdom of Portugal.

He married and had two children.

Bartolomeu Dias worked in the royal court, where he was superintendent for the warehouses.

On 10th October 1486, King John II of Portugal charged Dias with leading an expedition. Firstly, they were to sail around the southernmost tip of Africa. It was certainly hoped they would find a trade route to India.

Dias finally departed on his expedition in August 1487.

The expedition traveled the west coast of Africa, and they picked up more provisions as they went. They sailed past the areas now known as Angola and Namibia. Finally, they explored for several more months until the crew refused to go any further.

Bartolomeu Dias wanted to continue to India, but the crew was unanimous in wanting to return home to Portugal.

They landed in Lisbon just over sixteen months from the time they departed.

Dias discovered and named the Cape of Storms during his expedition, but the King renamed it. Consequently, it became known as the Cape of Good Hope.

The discovery of the shipping passage along the coast of Africa was significant. It meant the Europeans could take part in direct trade with India and the Far East. As a result, the merchants saved money because the middlemen were no longer required.

Two ships departed in 1498 on the maiden voyage to India. Bartolomeu Dias assisted with the building of the boats.

In 1500, Dias captained a ship for the second voyage to India.

Four of the ships sailed into a massive storm near the Cape of Good Hope. On 29th May 1500, Bartolomeu Dias died when his vessel hit the storm, along with everyone else on board.