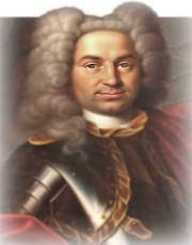 Balthasar Neumann was born on January 27, 1687. He was a famous German architect. Neumann started his work in 1719 when he designed a new palace in Wurzburg. Consequently, from 1729 he was put in charge of all major buildings works in Wurzburg and Bamberg. Balthasar Neumann had a unique way of designing good staircases and ability to use space. As a result, he designed over 100 churches, palaces, public building, and bridges. He also taught at the University of Wurzburg.

Balthasar Neumann was born on January 27, 1687, in the kingdom of Bohemia, now the Czech Republic. His father Hans Christoph Neumann was a cloth maker, and his mother was Rosina. He was the seventh child in a family of nine children. Neumann studied engineering before joining the Austrian imperial army.

During his service in the army, he improved his design skills. At the age of 27, while with the army in Vienna, Neumann learned many design styles.

Balthasar Neumann's career started in 1719 when prince-bishop of Wurzburg contracted him to lead construction of his palace. Neumann gave the project his personal touch despite the participation of other people. Additionally, Neumann was given a second task of designing the Wurzburg cathedral in 1721.

Other notable designs include twin-towered pilgrims church (Grossweinstein), the marble staircase (Augustusburg Palace at Bruhl), and the single-towered trinity church (Gaiback). Others works include the Benedictine Abbey (Neresheim), and Basilica of the fourteen holy helpers (Vierzehnheiligen). Balthasar Neumann designed more than a dozen important structures in and out of Wurzburg.

In appreciation of his work, the German 50 DM note had a picture of Neumann. It had a display of the famous staircases in the Wurzburg Residence.