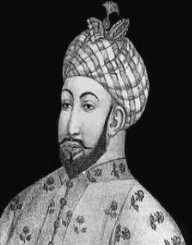 Babur was born 14th February 1483, to Umar Sheikh Mirza II, and Qutlugh Nigar Khanum. He was born in Andijan, a city in Fergana Valley, which is now known as Uzbekistan. He was the firstborn son, and his father, Umar Sheikh Mirza II, was the ruler of Fergana Valley. His mother was a descendant of Genghis Khan. They were part of the Barlas tribe, which originated in Mongolia, but also had Turkic and Persian culture and influences intermingled.

As well as the Chagatai language, due to the Persian influences, Babur was also very fluent in Persian, which was spoken by the Timurid elite.

Babur ascended the throne and became ruler of Fergana at the age of eleven, due to his father having an unexpected accident which caused his death. Although Babur had uncles in neighboring kingdoms that tried to dislodge him as ruler, thanks to the help he received, mostly from his maternal grandmother, he was able to hold on to power.

Most of the surrounding kingdoms were ruled by relatives of some description, and they were usually fighting with each other. The city of Samarkand came into focus as rivals were warring over it, and Babur decided he would capture it. He did just that in 1497, and after seven months, he finally took control. He was only 15, and the city’s capture was his first major achievement.

Babur became ill, and whilst he was concentrating on holding Samarkand, back home at Fergana, his brother took over the throne with the help of some of the nobles. Babur began the march back with his army to fight his brother, and he lost Samarkand to another prince, so he was caught in the middle, with both kingdoms lost.

Over the following years, Babur tried on different occasions to win back both the kingdoms but failed on both accounts. He escaped with a small band of faithful followers and lived in the hills of central Asia with local tribes. He tried to build another army, but finally realized it was a futile exercise, and gave up. He came to the realization that he would have to look further afield to find himself a new home.

In 1504, Babur captured Kabul, which had been going through unrest at the time. He continued as its ruler until 1526. He now had a new kingdom and could look towards regaining his wealth. Unfortunately, the revenue from his new home was very low, and in 1505, Babur made his first expedition to India.

Babur continued to fight, forming alliances, providing refuge to allies when needed, and eventually taking back the city of Samarkand, and losing it again for the third time. From 1514 through to 1525, Babur was able to manage a few skirmishes and started to train his army while peace predominantly prevailed.

Babur realized he needed a new place to create a proper empire, and decided it would be in the north of India. Once again, battles ensued, and alliances were made, and eventually, Babur was able to settle and become the first emperor of the Mughal dynasty. His reign began in 1526 and finished in 1530 when he died.

Babur had ten wives, as well as concubines. He fathered approximately 20 children. His oldest son, Humayun, succeeded him as emperor when Babur died.

The experts agree that Babur’s empire created a large Persian influence on the subcontinent of India.

Although Babur saw himself as a Timurid and Turk, he is a national hero in both Uzbekistan and Kyrgyzstan.