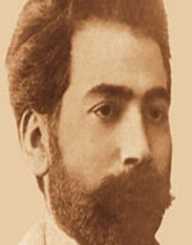 Azim Azimade was an Azerbaijani artist and cartoonist, also a self- taught caricaturist.

Azim Aslan oglu Azimzade, better known as Azim Azimade, was born on May 7, 1880. His family was a Karbalayi Aslan family in Novkhani village, Absheron peninsula. He was the only boy and the only child who lived past ten years old.

Azim had four sisters. His father was a farmer, like all the men, and a stone cutter; whom later joined the oil fields in Baku.

Azim Aslan went to a local Muslim school when he was eight, and committed a “sinful deed” of making sketches while the teacher was teaching the Koran. The result of that beating made him fight for what he considered as unreasonable religious practices.

With the support of his grandmother, Azim started studying in Russian- Tatar school, where it taught both Russian and Azeri. His education was cut short, as when he was fifteen, his father insisted that he earn a wage. It was in the secular school where Azim was introduced to fairy tales and art; he continued to teach himself drawing skills.

Azim Aslan was fifteen when he worked as an errand boy in a mill, where he met Russian painter Durov. The painter was decorating the home of Azim’s boss Agabala Guliyev. Durov enlisted his help to paint the interior walls with oil painting, even though he was encouraged to study painting, Azim lacked the funds to study art formally. He gained all his skill by self- taught.

With that painting, he began releasing drawings that are socially and politically motivated and was recognized to be the founder of Azerbaijani satirical graphics.

He was particularly active in the 1920s and 30s, illustrating literary works for many writers. He was named Head Artist in Molla Nasraddin after the revolution in 1922.

At the same time, Azim Aslan was also appointed as head of the art department at the Republic’s Education Commissariat, and as the chief artist of Communist, a favorite Azeri newspaper.

In 1923, Azim was the Chief Artist for the State Theatre, and he was in charge of the 50th Jubilee celebrations of Dramatic Works. His works were exhibited in Moscow, in 1933. The exhibition focused on Azerbaijani artists.

The same year saw Azim reaped the most profits from his art. Azim also directed the Baku's Art School from 1928 for ten years.

Azim Aslan also created illustrations for children’s books such as Wild Ox and Shadows of the Past. Azim’ also drew caricatures of people during the war. His exhibition in 1940 showed around 1,200 pieces of work spanning thirty- five years.

Azim drew his most famous 100 Types series in 1937, portraying everyday people in Baku in the early twentieth century. The set was ten horizontal compositions each with another ten images and was drawn side by side, trying to reproduce the past.

He was also famous for his anti-religious views, he lived next to a mosque and frequently drew caricatures of the mullahs to anger them. His work features society issues and women’s rights, openly criticizing the unfair way women were treated.

In 1927, Azim Azimzade was the first artist to receive the "People's Artist of Azerbaijan" award.

Azim Azimzade loved his five children, especially fond his son Latif. Latif was drafted into the second world war, and news of his death arrived in February 1943. Azim Aslan was devastated and died four months later on June 15, 1943.