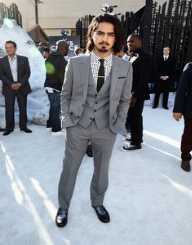 Avan Jogia is an actor and launched "Straight But Not Narrow" campaign along with his co-star Matt Bennett. SNN is founded to influence young male’s views on LGBT teens positively.

Avan Tudor Jogia was born on 9th February 1992 in Vancouver, British Columbia. His father is a British Indian expatriate of Gujarati ethnicity, and his mother is of English, Welsh, and German descent. Avan is the younger brother of music producer Ketan, who works in London. He is also trilingual, speaking English, Gujarati, and French.

Avan Jogia was homeschooled from fifth to eighth grade. After that, he attended Killarney Secondary School. At the age of sixteen, he left school to pursue acting full time, moving to Los Angeles. Initially, the move was temporary, to see if he could land acting roles.

Avan Jogia’s rise to fame came with the popular Nickelodeon series Victorious. Victorious stars are Victoria Justice, and Ariana Grande debuted in 2010. He played Beck Oliver, the boyfriend of Jade West. He played Beck from March 2010, through to the fourth and final season in 2013. Beck Oliver appeared in iParty with Victorious, a crossover movie with iCarly.

Avan Jogia's first role in showbiz was A Girl Like Me: The Gwen Araujo story, a biographical film in 2006. Avan was the younger brother of a transsexual girl. In 2007, he appeared in three episodes for series Aliens in America. After that, he was Ben Stark in Caprica in 2009. His big break came in Victorious; the show allowed him to get more job offers.

After Victorious, he played Danny Desai in Twisted and the Pharaoh Tutankhamun in the miniseries Tut. in 2016, he played Bones in Last Teenagers of the Apocalypse. Apart from landing parts in television series, he also has many film credits in movies, playing minor roles.

In 2011, Avan directed and starred in a short film, Alex. In 2015, Avan released horror – thriller Of Dogs and Men, he had directed the short film. Sir Ben Kingsley, who worked with him in Tut, was in the short thriller. Avan also directed and produced Last Teenagers of the Apocalypse, it is a four-part short series, with him appearing as Bones. The set released in April 2016. He released Shangri-La Suite (or Killing the King), a film based on 1970 crime drama, later in the year.

Other films that Avan Jogia will star in include The Outskirts, The Year of Spectacular Men, and The Drowning.

In 2011, Avan Jogia co-founded online campaign call Straight But Not Narrow (SNN), which tries to promote acceptance and positive views on LGBT community.

Avan Jogia also participated in many charitable organizations, such as Peace First Ambassador, host of the PBS series "Reel Works,"

Avan Jogia was nominated for Teen Choice Awards in 2013 and 2014 for Twisted, but he did not win the prizes.

From 2011 to 2016, Avan Jogia was dating actress Zoey Deutch. He has tattoos on his chest, legs, shoulder, back and his lower arm. He has dual citizenship: Canada and United Kingdom.

Avan Jogia describes himself as “spiritual,” he has roots in Hinduism and has practiced Buddhism.